Well, free agency has calmed down so now the offseason focus shifts over to the NFL Draft. Hundreds of college football’s best players are hoping to hear their names called at some point between April 27th and April 29th. The Tampa Bay Buccaneers currently hold the 19th overall pick in this draft and they’re in the market for skill position players. This draft is deep with running backs, wide receivers and tight ends which are all positions from which the Bucs could add playmakers for Jameis Winston and the offense. Bucs GM Jason Licht and head coach Dirk Koetter have been saying all offseason that they need to add more weapons on offense and more pass rushers on defense so that’s what this year’s draft picks will most likely concentrate on. After breaking down the possible options available for the Bucs with that first round pick, I’ve decided that one of the top two tight ends are going to be the best choice for them. However, since the draft is usually unpredictable and nobody really knows what can or will happen with it, I wanted to take a deeper look into this year’s group of tight ends. Since there’s a chance that those top two might be gone by pick 19, the Bucs may have to wait until the mid rounds to grab one. So, let’s take a look at my top 10 tight ends in this class and see where they are predicted to fall in the draft… 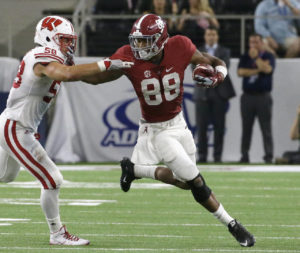 Despite being underutilized in Bama’s offense, he’s still the top tight end coming out of college this year. He’s the best overall tight end in the draft and possibly the most complete tight end to come out in years. He’s an exceptional athlete with long arms and big hands and wide receiver like acceleration off the line to burn man coverage. He’s also very adept at finding the soft spots in zone coverage. He has the physical characteristics to be a mismatch weapon in the NFL because he’s too big for safeties and too fast for most linebackers. He will be a legit 3 down starter and has the potential to be a dynamic NFL tight end. If he is still sitting there at #19, then he should be the Bucs pick…it’s a no brainer to me. I realize that the Bucs have an up and coming star in the making with Cameron Brate, but adding another pass catching tight end to the mix could take this offense to another level. Dirk Koetter is a big fan of the two tight end set and he would have some fun finding ways to use his new toy.

The Miami Hurricanes have a longstanding history of putting out big time NFL tight ends such as Greg Olsen, Jeremy Shockey, Jimmy Graham and Kellen Winslow…and Njoku is the next in line. He is freakishly athletic and uses his speed to get open against slower linebackers and his size to make contested catches downfield against smaller safeties. He’s another player, like Howard, who creates mismatches and will continue to do so at the next level. He’s got long arms, big hands, elite athleticism and tremendous acceleration. He’s a fighter as a blocker but still needs some work and could 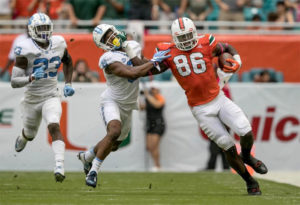 stand to add some weight and strength to help improve it, but that’s not why a team will draft him. He’ll be drafted as a pass catcher, a seam buster and a redzone nightmare for opposing defenses. If Howard is in fact gone at #19, then Njoku should be the clear cut choice for the Buccaneers.

Though he only played one year of high school football, he’s following the recent trend of former basketball players turned intriguing NFL tight end prospects. His route running could use some polishing up, but he’s an angry blocker, a physical runner and a slick athlete with good acceleration and natural hands. It’s being said that he has the talent and ability to be a very good NFL starter with Pro Bowl potential. Should both Howard and Njoku be gone at #19 and the Bucs go a different route and he could be an option with their second or maybe even third round pick.

Drawing comparisons to the Redskins Jordan Reed, he is a speedy receiver and a good route runner but he isn’t a very good blocker. He will most likely appeal to teams that are strictly looking for a chess piece in a matchup based passing attack which is what the Bucs would be looking for in him. If the Bucs decide to wait until the third round to take a tight end, then this could be their man.

He is a pass catching tight end in a blocking tight end’s body. He has a well built body combined with above average speed and acceleration for his size. As a former high school hoops star, he adds quick feet, freakish athleticism and leaping ability to an enormous frame to pose a real threat in the redzone. He’s also a surprisingly poor blocker for his size but he’s going to be more of a matchup problem causing player than a blocker for whatever team drafts him. He could be an option for the Bucs in the third or possibly even the fourth round.

According to NFL.com, “he is a well rounded tight end with the ability for three down potential in the NFL”. He has outstanding size for the position and the athleticism to play in-line, in the slot or as a wingback. The biggest problem, and the probable reason for him dropping into mid rounds, is that he’s admitted to being “lazy” and his motor and effort is being questioned. If the right team gets him and can harness his abilities and help him realize his full potential, they could be getting a serious steal in the third or fourth round.

He has outstanding size and athleticism for the position but he’s a sloppy route runner and is too much of a body catcher. He also lacks the power and toughness to be an inline blocker. He has a lot to clean up, but does have potential to be a longtime starter and touchdown machine in the NFL. In the right situation, he could end up making a team very happy as a fourth round pick. 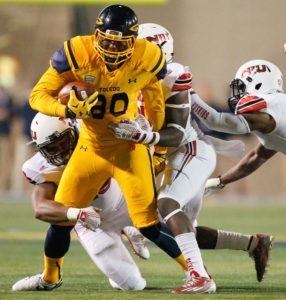 Scouts say that he is “the best pure blocking tight end in the draft”, but with the athleticism and ability to be a good pass catching threat especially in the redzone. He’s a chain mover and a touchdown machine with enormous hands that had 80% of his catches go for first downs and 36% of his catches go for touchdowns. He’s not the pass catching tight end that the Bucs would be looking for in the early rounds, but he could be a good option as a second TE pick in this draft to eventually take over for the aging Luke Stocker as the primary blocking tight end.

“He isn’t great in any one area, but he’s good in most so he should be a safe pick and a reliable starter in the league” according to NFL.com. With a lackluster season and some trouble with shoplifting during the Razorback’s bowl game weekend, he has seen his draft stock plummet. It doesn’t change the fact that he’s an NFL body type with three down potential and the arm length and hand size of an offensive tackle. He’s a true blocking tight end but also a big, reliable target especially in the redzone.

Though he does lack the size of today’s NFL tight end, he’s an athletic tight end with four years of pass catching production. He’s a talented seam buster and is competitive with his run after the catch, but he also has inconsistent hands and is a sloppy route runner. His best fit seems to be in a zone blocking offense in the NFL or maybe even an offense that still utilizes a fullback position.

My next article will probably concentrate on the wide receiver class, which is also very deep. Stay tuned for that but until then, as always…..GO BUCS!!!

Adrian Peterson to the Bucs…from both sides

A couple of days ago, Bucs fans set social media on fire when a picture surfaced on Twitter of franchise QB Jameis Winston in Houston, Texas with renowned quarterback guru George Whitfield. However, that's not what got Bucs fans excited....