We are four weeks into the NFL season and it is a quarter of the way done for our Tampa Bay Buccaneers? I know, crazy right? It feels just like yesterday the Bucs kicked off the season in New Orleans. Since then, there’s been ups and downs. Let’s review the first quarter of the season and get ready for the rest of the year.

D-Jax has been a force this year. Jackson leads the team with 7 20+ yd receptions, is tied for the team lead with Mike Evans in touchdowns and is on pace for nearly 1700 yds and 12 touchdowns. Jackson has also shown he’s still a dangerous threat as a punt returner, having an 80 yd touchdown called back by penalty. The biggest question for Jackson is can his stellar play continue without Fitzpatrick. Jackson seemed to have that magical connection with the Bucs’ backup QB that he just hasn’t displayed with Jameis Winston. It will be on Winston to find a way to establish that relationship with D-Jax and continue to take advantage of Jackson’s abilities.

The Bucs hoped JPP would finally give the Bucs the outside pressure they have so desperately needed for so long and he hasn’t disappointed. Pierre-Paul has a team-leading 4 sacks and also leads the team in QB Hits with 9. While the Bucs defense overall has been terrible, it’s not JPP’s fault, he’s been outstanding.

Best Moment of the First Quarter 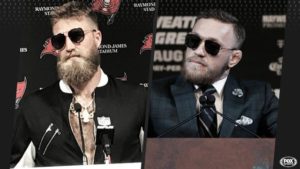 Following the Bucs shocking victory over the Super Bowl Champion Philadelphia Eagles, Tampa Bay quarterback Ryan Fitzpatrick showed up for post-game interviews channeling his inner-Connor McGregor by wearing teammate Desean Jackson’s coat, jewelry, and shades. It was a funny moment that got a lot of run across the NFL. Unfortunately, the Fitzmagic wouldn’t last, as the Bucs would lose the next two games.

Worst Moment of the First Quarter

It’s one thing when future Hall of Famers Drew Brees and Ben Roethlisberger as well as Super Bowl MVP Nick Foles, but to allow Mitch Trubisky to nearly tie the NFL record for touchdown passes against you? That’s embarrassing. The Bucs completely no-showed in Chicago and embarrassed the organization, shaking the confidence of all involved and threatening the jobs of everyone in that building.

It’s one thing to just be undermanned and lacks the skill to compete. It’s entirely another to be woefully unprepared for a game, both physically and mentally. Tampa Bay isn’t anywhere near being good enough to do that and be competitive in the NFL.

Ryan Smith has been a target for a lot of Bucs fans and media types as one of the weakest links in a bad secondary. Subbing in for injured Brent Grimes, Smith played well against the Saints and the Eagles before being benched against Pittsburgh after Grimes made his return. After Grimes struggled against Pittsburgh and in the first half against the Bears, Tampa Bay inserted Smith against Chicago in the second half – coaches’ decision.

Smith will never be confused with Darrelle Revis, but if he can continue the upward trend, he might be a serviceable corner for the Buccaneers.

Tampa Bay committed big money in coaxing Brent Grimes to stave off retirement for one more season. Grimes has been great for the Bucs during his time here, but father time and wanto could be catching up to the 35-yr old former Pro Bowler. Grimes has been nursing a groin injury suffered during camp that cost him the first two games and upon his return, he struggled badly in coverage, proving to be a liability.  There have been questions raised about Grimes just going through the motions for a paycheck. I don’t know if I’d go that far, but he definitely isn’t the same player he’s been in Tampa Bay, be it because of injury or just an erosion in skills. It wouldn’t surprise me if Grimes isn’t your starter in Atlanta. He’ll need to really prove it to the coaching staff in the next couple weeks that he is healthy, engaged and ready to return to the reliable defender he has been.

Where the Bucs are and Where They Are Going

The Bucs are who their record says they are. They had two really good performances, a so-so performance losing a game they should have won and then had the debacle in Chicago.

Chicago significantly shook confidence that the team is going in the wrong direction. I think there were a lot of factors that contributed to it, the short week is one of them. Some of the players may have taken the Bears offense lightly while others may have gone through the motions in their preparation knowing the bye week was looming. Of Course, Chicago is also on bye this week, and they played their backsides off, so it’s a pretty poor and unprofessional performance by the Buccaneers to not match that intensity.

So who are the Buccaneers? The team that beat the defending World Champions, the current leader in the NFC South (and defending division champ) and narrowly lost to the defending AFC North champion? Or the team that was bludgeoned in Chicago?

Obviously, we’ll find out in Atlanta. Tampa Bay needs more from their defense. If they can hold opponents in their 20’s and their offense avoids costly turnovers, the Bucs will win most of those matchups. One of the more interesting developments is the return of Jameis Winston to the lineup. We knew Fitzpatrick would return to the mean after two amazing games. He set an NFL record as the only QB in NFL history to begin a year with three consecutive 400 yd passing games.

His jersey was sent to the Hall of Fame in Canton. It was a phenomenal, fun run that earned Fitz a lot of fans locally and Nationally. It puts a lot of pressure on Winston to perform at an efficient, high level. No one can expect Winston to throw for 400 yds and 3 TDs every week, but the Bucs need a quarterback who will consistently sustain drives, get points on the board and avoid turnovers. It’s no secret that the Bucs lost both games where they struggled with the turnover ratio. This team can’t lose the turnover battle and win consistently.

It will be interesting to see if Jameis, a turnover-prone quarterback, can do it.

If you look at the stat sheet, you wouldn't think the 2018 Bucs first-round pick made much of an impact in his first game in the NFL.  According to Sirius XM Barstool sports producer Steven Cheah, via his twitter, @Chea_Say , Vea...

Outside, looking in: Bears and choices

October 23rd, 2011. Wembley Stadium in London. The Bucs were 'at home' to the Chicago Bears in the NFL International Series. It was that day, almost 7 years ago, where despite us losing, I became a Tampa Bay Buccaneers fan....