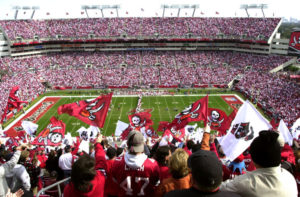 It’s the same old story, isn’t it? Between fans and media alike, we just hear the craziest things revolving around the Bucs. It happens every year. Gerald McCoy’s work ethic is called out. Doug Martin’s value is questioned. Coaches’ heads are called for on platters before they’ve even been able to memorize their new zip code. Is it the Florida heat? Is there something in the water? Or is Tampa just ignorant about football? It’s hard to tell, but this year is no different. Let’s dispel some of this year’s ridiculous notions.

Tampa Bay has a terrible defense

This rumor has been especially active amongst the fan base, but has gotten some play in the national media, as well. We’ll start with the numbers. Tampa Bay currently has the 13th overall ranked defense in the league. Not exactly what we’ve been led to believe, no? We’ve been lead to believe that Tampa Bay’s secondary is awful. The Buccaneers are currently ranked 13th against the pass. The rush defense is ranked 20th, which is definitely mediocre, but when you consider that the Bucs have lost more defensive lineman to injury than dollars lost by gamblers in Vegas this year, 20th against the run sounds absolutely fantastic. Can you name two lineman that played against the Panthers? I could win some of those gamblers’ money back on that bet.

This accusation is made often. I recently had a conversation with a Bucs fan who thought that McCoy should be traded. This fan thought that in all the years Gerald has been in Tampa, “the Bucs have seen no return on investment.”

You’ll never hear someone who watches film say that. Forget the fact that Gerald is a perennial Pro Bowler. McCoy gets double and triple teamed on every play he is involved in. He can literally take up an entire side of an offensive line. He gets off the line faster than any player in football, and that’s an undeniable fact. Somehow, even with the amount of attention that he receives from opposing protections, and the lack of talent he has played with in previous years, he continues to make plays. McCoy makes the rest of the defense better just by walking on the field, but he also makes huge plays. Buccaneer fans should be down on their knees in thanks for the privilege of having a beast like Gerald McCoy on their team.

Dirk Koetter has been a disappointment

Au contraire, Bucs fans. Coach Koetter has been anything but. A first-year head coach in the NFL always has a host of unseen concerns to react to, and not many individuals are cut out for the job. Whether it be losing his top two running backs to injury, one of which being last season’s second-leading rusher in the league, or losing his entire defensive line, or overcoming a horrendous start by his kicker, Dirk has stood up to every challenge and weathered the storm.

Early on this season, his play calling was pass-heavy, and onlookers thought he may be too stubborn to change it. Negative, ghostrider. Coach Koetter made the adjustment, found players to replace his star RBs, and has committed fully to running the football. His ability to make the adjustments to compliment his players on the field has been top-notch. Many questioned former head coach Lovie Smith’s ability to do just that, and yet Dirk has not gotten the credit for taking advantage of his players’ talents when he has proven himself to be quite capable of it.

Vernon Hargreaves III wasn’t worth a first round pick

Yet again, you just can’t watch game film and say that. He’s been glued to his receivers all year. No cornerback on the Tampa Bay football team has played better than him, and he is a rookie playing with two former Pro Bowl CBs. He defends passes, he takes great angles, and his reads are getting closer every week to putting him in a position to make splash plays. At this point, he looks like the smartest player on the defense. But, that’s not it. Hargreaves has also shown great tackling skills, which was one of the only knocks on him coming out of college. Going into Week 8, VH3 leads all Buccaneer cornerbacks in tackles. He was worth every bit of that first round pick.

Hopefully, having countered the rest of these arguments, we don’t really have to do much with this one. Between the improved defense that looks even better when the offense doesn’t turn the ball over on their own 20, and Coach Koetter and Coach Smith’s solid captainship of the ole pirate ship, this is not the same Bucs team. They’re 3-3 (2-0 in the division), in second place, and showing promise. As they continue to get healthier, you could start to see some fireworks. It’s been quite awhile since you could say those things, Bucs fans. Take a deep breath and enjoy it.

Thomas Sandberg is a life-long Buccaneer fan who hopes to entertain, inform, and enlighten you. He played numerous sports in his youth and served as an army airborne infantryman after high school. He currently works in internet marketing, but is interested in making sure that his writing about your Buccaneers holds your attention long enough to make it worth your time.

Ahhh, SWEET VICTORY...it feels good doesn't it, Bucs Nation? My food tastes better. The air smells sweeter. The sun shines brighter. A Buccaneers win on Sunday makes Mondays tolerable. Enjoyable even. Strolling into work, excited to walk in with your...