My name is Simon and I’m a Bucs fan in England.  I’ve been a fan of the NFL for a while, watching quite literally from afar.  I live in the east of England, Norwich to be precise.  When I was younger, my interaction with American Football was restricted to the Superbowl highlights program.  With the time difference in the UK, any live coverage was on far too late at night for someone who had to get up to go to school the next day.

Fast forward a few years.  Quite a few years as it happens.  I’m an adult, I have a house, responsibilities and so on.  In February this year, I was in Houston with some friends to soak up the Superbowl experience.  Today as I write this, we have booked our flights for Superbowl 52 in Minneapolis.  (Must remember to pack a coat) . It’s funny how things work out. 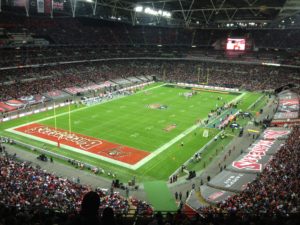 Somewhere in-between those two polar opposites, I became a Bucs fan in England.  I remember the day, October 23rd, 2011.  Wembley Stadium in London, game 5 of the International series. Tampa was the home team that day and was hosting the Bears.

I went to the first official International Series game in 2007 when the NFL sent over the Giants and the Dolphins.  My appetite for NFL started to grow a little and the following year, after a 37-32 win for the Saints over the Chargers, I was really starting to get involved.  We’ll skip through 2009 when the Bucs were pummelled by the Patriots and over the Niners defeating the Broncos the following year, to bring us back to 2011.

For me, if you’re really going to “invest” in a sport, you actually need to invest in it.  To do this properly, in my opinion, you need a team.  On this cold winter day in London, I made a choice.  Did I want to one day make a trip out to the often equally as cold Chicago to see a game or perhaps the more often than not warmer climate of Tampa?  Decision made.  I’ve been to Tampa since then, a story for another day.

Now I know this isn’t the way you typically pick a team, you normally have a connection.  Maybe a father or grandfather who rooted for them, or you live in the area.  I’ve supported my UK football (soccer) team for 21 years, the stadium is 12 miles from my house.  It’s a lot tougher to choose a local team when your nearest team is a good 7 hours away by aeroplane!

Speaking with my friend, a Raiders fan (I didn’t appreciate the irony at the time) we discussed jersey options.  If I was going to spend a wedge of cash, I needed to make the right decision. He informed me that Josh Freeman was the up and comer, the potential franchise QB.  I took his advice and parted with my cash. (More than once after the NFL switched from Reebok to Nike).  To this day we still have a difference of opinion on this front, I imagine he was getting some retribution for 2002. 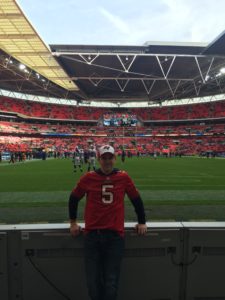 The Buccaneers lost that day.  What you may or may not remember is that prior to losing to the Bears, we had won 4 of our previous 6 games.  We went on to lose the following 9 and finished 4-12.  A tone had been set – I certainly wasn’t going to be accused of being a bandwagon rider in the coming years, no winning seasons until 2016.

So here we are.  If you believe the NFL network, Tampa is the team on the rise and the nation is watching.  For what it’s worth, there are a lot of us across the pond counting down until September too!  With no UK football now either until August, it’s a long few months ahead.

Be sure to stay tuned for more musings from the Bucs fan in England.  Also, check out the latest blog posts from WhatTheBuc including the excellent “Welcome Aboard” series.

The next installment of my "Welcome Aboard"  series is about a guy that joined the team late last season but only saw limited game action. Wide receiver Josh Huff didn't make much of an impact on the offense or special teams...

Can you believe training camp is right around the corner? Typically for football fans, particularly ones that follow a team that doesn't qualify for the postseason, the off-season can be one long dragged out trek back to the comfort zone...