I’m writing this post as I sit watching on TV the final of 4 NFL games in London this year. It’s one of very few I have missed over the 10 years since the “International Series” began in the UK.  It wasn’t all that long ago we only had one per year.  Of the 21 games the UK has hosted in the ten years since the International series began, I’ve attended 18.  After one game per year between 2007 and 2012, we moved to two games in 2013. This quickly grew to three games the following year. The rapid growth has come from a hunger for more football. Rumours continue to swirl about a UK franchise within the next 5 years. With this, there has come an apparent sense of entitlement swirling amongst the fans.

As the number of games has grown, I see more and more Bucs fans on a more regular basis. Last weekend I was at Twickenham in London for Cardinals @ Rams. It was the first time in a while that we had seen our UK game pushed to a later time slot, due to the two west coast teams. As a result, it was also the first time in a while where the Bucs were playing whilst I was at a game. As would be the case in the US, the in-stadium PA and scoreboards keep us updated around the league, along with the occasional flash of Red Zone. 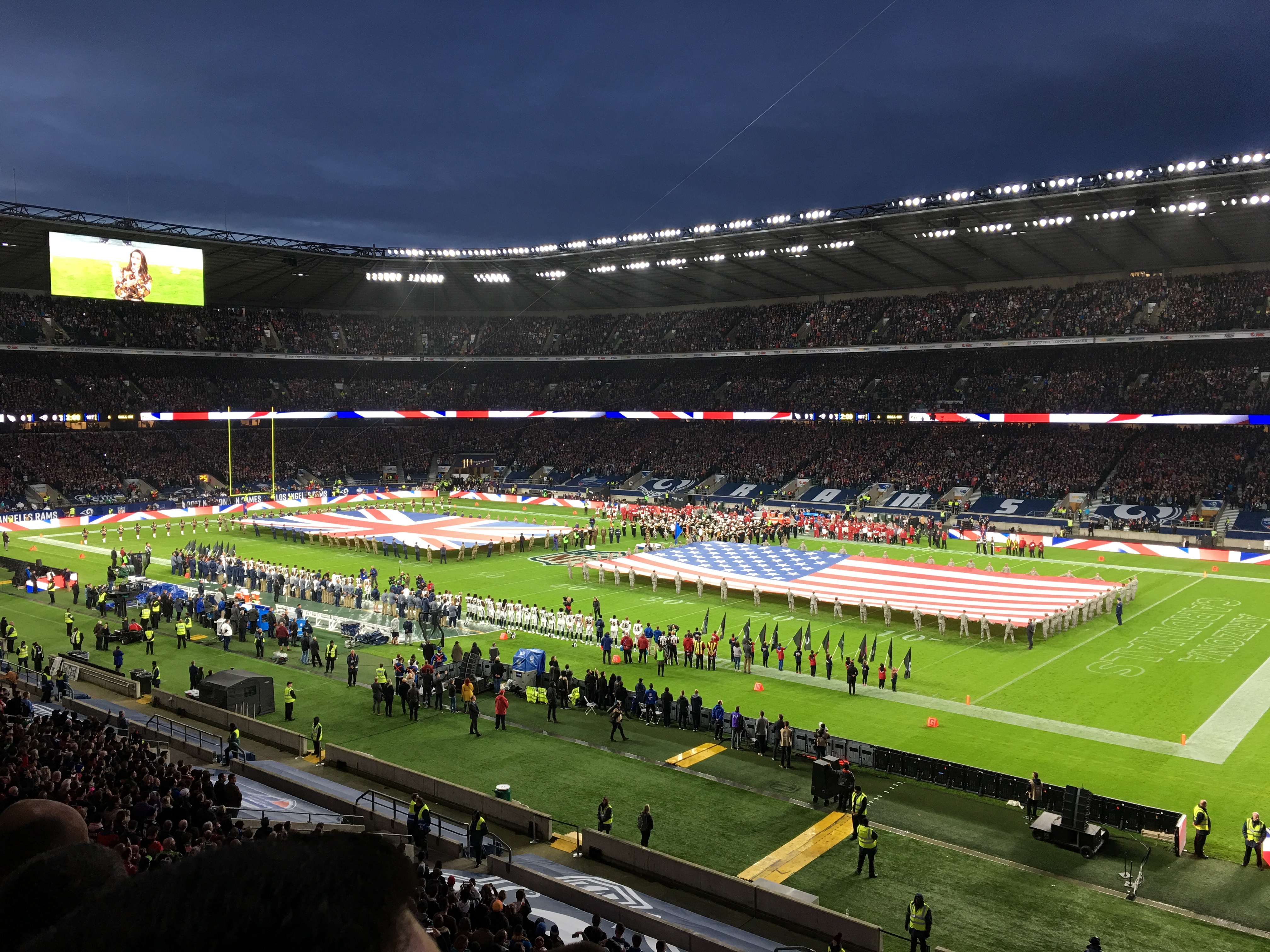 The game was disappointingly one-sided in a divisional matchup. The Rams put up 33 points without reply. The only contribution of note from the Cardinals being a broken arm for Carson Palmer. He is the fortunate one, he won’t now have to shoulder any blame for a season which is pretty much over. Their fans had expected so much with one of the best running backs in the league when David Johnson went down the season hung by a thread.

It was after the game when I heard people chatting, that I began to wonder how the game in the UK had evolved. I overheard more than one person complaining about the quality level at the London games. A few weeks prior we had a Miami “home game” when they hosted the Saints. It was a bit of a snooze fest, the Saints rolled out 20-0 winners. The UK fans now treat the NFL like it is their game too, rather than feeling like we are borrowing it from the US for a short while. With a reported 5 games next year, the feeling of inevitably acquiring a franchise grows. We are about to have our first purpose-built stadium for UK football and NFL, with a fully retractable field. We are in it for the long haul.

Do we now have a right to complain about the games? On paper, Saints at Dolphins should have been a decent matchup. You could argue the same about Cardinals-Rams too, even with the Cardinals being minus superstar running back David Johnson. Right now, I have the pleasure of watching the Browns host the Vikings. Yes, I guess the Browns were likely to be poor this year, but the Vikings have been decent. It’s almost halftime, the Browns lead 13-12. Probably not the score that people expected, with most predicting a comfortable win for the Vikings.

The unpredictability of the NFL shows similarities to UK football, whilst on the whole, the best teams win more often than not – it can throw a regular surprise in to keep us on our toes. We too though are also subjected to the occasional dull 0-0 where we wonder what else we could have done with that time. We feel like we have the right to complain about it because we pay our hard earned cash to watch it. 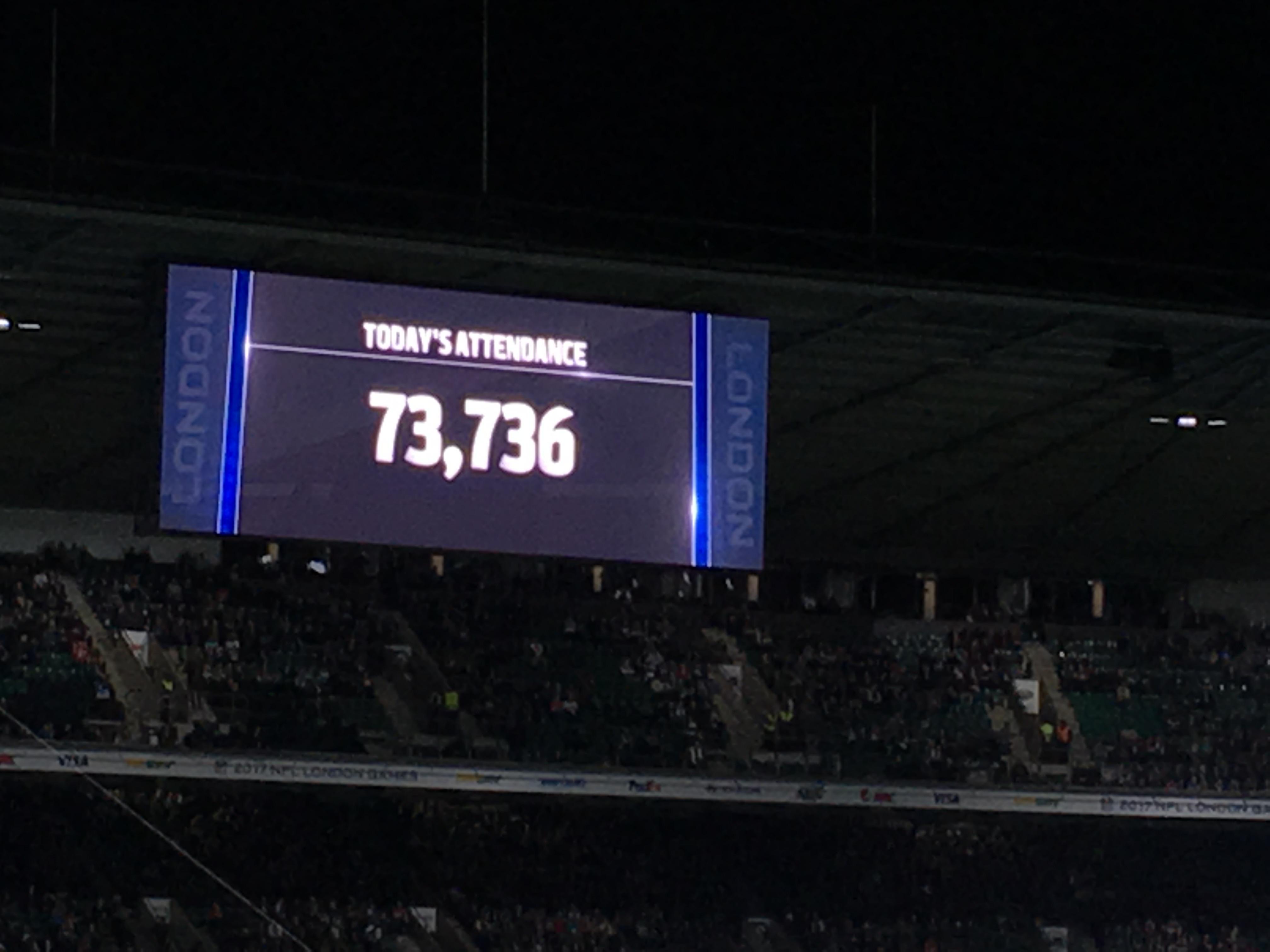 What I’m eluding to in all of this is the fans apparent sense of entitlement.  The NFL is giving us games but we want the “good” ones.  That of course, is not how football works. This leads me nicely into the Bucs season so far and again pulls from conversations I heard whilst at Twickenham.

After the game-winning field goal sailed through the posts for the Bills, I disappointingly trudged back to my car for the 3-hour drive home. As I walked, I passed a group of fans, one of which was wearing a Bucs jersey.  He saw me in my 58 jersey and said: “sucks huh”. I kind of nodded, he followed up with “we should be beating teams like this, it’s not good enough”. When did we become the team that “should be beating someone”? Yes, on paper we had the tools that certainly should have allowed us to be competitive, but a guaranteed win?

Fed by the media

I’m not sure whether this stems from the information we are fed in the UK. Hard Knocks lead with a storyline of the Bucs being the team on the up. Most news outlets had us as the ones to watch. We all got excited and suddenly forgot that wins are earned and not given. I love the fact that we are so invested in the game and the team now, that we care so much about losing. That is what following a sports team is all about. There needs to be a grasp of reality though.

Unfortunately, by the time I had finished this post, the Bucs had chalked up loss number 5 (and the Vikings eased passed the Browns). Those who feel that we are entitled to wins, most likely have now said that the year is a write-off. Technically it’s not, yet. There are games remaining to be won. Even if the likely required outcome of winning 8 of the next 9 is quite the pipedream. I want to see us win, I want to believe that we can still make the play-offs. Do we deserve it? Right now, no. Can we earn it, mathematically, yes!

The Bucs now need to stand up and show us that we do not have an entitlement to success, but that it can be earned with hard work. Starting in New Orleans.

I will return shortly with another entry of “From the outside, looking in”. In the meantime, be sure to keep up to date with all of the excellent content including Jon’s recent post “What Can I Say…It’s a Bucs Life” Also, the weekly battle of the writers in our picks competition.  (Spoiler alert, the English guy is still winning).

What’s Going On With the Bucs D-Line???

Evan made a move in this week's picks, vaulting all the way to second place just one behind our leader Simon. Find out what the guys are picking for Week 9! Weekly NFL Picks Standings WTB Pick Standings 1 2...