As you are hopefully aware, WhatTheBuc is run as a not for profit organisation.  In order to help contribute to the running costs and allow supporters to get a bit more involved, there is the WhatTheBuc Patreon model. One of the excellent supporters of the WhatTheBuc Patreon is my fellow Brit, Callum. Callum is based in Liverpool (in the north of England where it rains a lot). I recently caught up with him to talk all things Bucs.

How did you become to be a Bucs fan?

“It’s a strange one really. I work shifts 2 days, 2 nights. A friend I work with is a big Cowboys fan (surprise surprise) he watched some of the games one evening and I got involved/interested that way. To fully immerse into NFL it made sense to pick a team. I didn’t have a single clue how teams were performing or geographical location. So I simply picked the team I had the most “affiliation” with. The Bucs! Like many Brits, I’ve been on many holidays to Florida. Heading down to Tampa to visit Busch Gardens I noticed Ray Jay. Simple as that really. It’s the closest I’ve been to an NFL stadium, so it was a good enough reason as any!”

When did you begin supporting the Bucs?

“I’m a fairly new fan of the NFL and Buccaneers, it was part way through the 2013 season when I started expressing an interest in the sport. So I can say that obviously, I haven’t been a glory supporter. Hopefully, that could change in the coming years with the team looking stronger as seasons go on. Getting Mike Evans in that 2014 draft was amazing. The guy is going to be a Bucs legend!”

What made you become a WhatTheBuc Patreon?

“I’ve been a WhatTheBuc Patreon for around a year now, I think I was one of the first! I chose to become a Patreon due to the value that I get from WTB. I gain a lot from the podcasts and their articles so it’s a way of me supporting them from over here.

The charity work is incredible with some fantastic causes. If I can stick my hand in my pocket every month to support their charities and therefore the WhatTheBuc team. I’m more than happy to do so.”

I saw that you have been to Ray Jay, how many games have you been to?

“My only visit to the Raymond James was for the Cowboys a couple of years ago (I went with a few friends and the lad mentioned above) the game wasn’t exactly a contender for game of the year but a win is a win no matter how you get it!  It was a fairly crazy weekend! 5 of us flew over on a Friday stayed around the Ybor. Went to Temple/ USF on Saturday. Bucs Sunday. Busch Gardens Monday and flew home Tuesday.

We try and plan something every year but due to work commitments and family, we couldn’t get a date. The good news for me is that I’ve managed to persuade my wife to take a couple of weeks holiday in America this October, unfortunately not to Tampa. New York is the destination and a little road trip up to Buffalo for the game on the 22nd! Can’t wait for that. Best remember to take a coat! 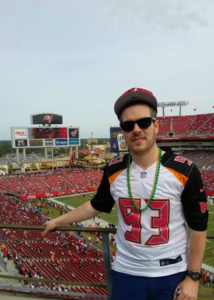 I actually met Derek during my trip too which was a pleasant surprise. That morning I’d had a couple of WhatThe Buc podcasts playing in the hotel room. After a night on the beers, I was too hungover to go to the WTB tailgate beforehand which I regret.

After the game, we hung around the Ybor for some celebratory drinks! A little later in the night, I bumped into Derek and a few of his friends in the Bad Monkey (think that was the name) which made the day even better. A highlight was a friend of mine (a bit of a gym rat) having an arm wrestle with a friend of Derek’s and ex-NFL player Ronnie Ghent. I stayed in the bar to talk football with Derek before I stumbled back to the hotel for a day in Busch Gardens the following day. Not the best decision considering I had the world’s worst hangover!”

How do you find the experience of a live NFL game in the US vs a football game over here?

“There isn’t really a great comparison between NFL and football (yes football!) in my opinion. They’re two different animals. NFL is a so much about the day! The NFL just totally dominates Sundays. It’s amazing. The tailgating. The people. The game!

I’m a season ticket holder of my football club Everton. My team are a reasonably good side but the draw to football is different. For me, I’ll meet up with a couple of close friends in the pub beforehand. Have a couple of pints and head home, then forget about it until the team play again. The strange thing is that the Bucs are becoming the team that can ruin my week ahead of Everton!”

What are your thoughts on the up and coming season?

“I’m optimistic about the season ahead. There’s a much better blend of age/experience compared to previous years and I’m delighted that Mike Smith signed an extension. Let’s hope the defense can hit the ground running this year. I’m still slightly concerned with depth at DB but let’s hope there’s a gem hidden away in this big roster come training camp.  The offense hopefully won’t have the same excuses of the past few years with its lack of “weapons”. I’m looking forward to seeing Sweezy play.”

What lengths do you go to, to ensure that you stay up to date with Bucs games?

“I have no excuses to miss a Bucs game, I have NFL game pass and the coverage on Sky Sports TV is improving year on year. I watch every game live whether my wife likes it or not, I also listen to a fair few Bucs podcasts as the coverage of the Bucs isn’t great. Podcasts and the pewter report are vital for me to know what’s going on across the pond.”

Thanks to Callum for taking the time time to share his thoughts, also for his support of the WhatTheBuc Patreon model. If you would like to follow Callum on Twitter to talk all things Buccaneers, you can find him via @CallumEFC.

Should you have not read my debut article about being a Bucs fan in the UK, you can do so here.  You can also check out the latest in our Bold Predictions series, “Are the Bucs really this good?”

See you next time for more “From the Outside, looking in”.

Football seems to be right around the corner. The Buccaneers have now wrapped up OTA's and Mini Camp. Next up is a much deserved 6 week rest period. After that rest, it is back to the grind in late July when...

Are the Bucs Really This Good?

Happy Fourth of July, everyone. I hope you and yours have a safe and pleasant holiday weekend. While many are thinking about barbecue and freedom, I'm thinking of a different type of fireworks – the ones that Jameis Winston and...