The rumors have been swirling around for a while now and they’ve finally come to fruition. Our Tampa Bay Buccaneers will be featured on HBO’s hit series Hard Knocks this season. The reaction from fans, and even amongst us here at WTB.net, are mixed. I’m here to make the argument for the positive aspects of this situation.

The Buccaneers were actually an obvious choice when it comes right down to it. The show does have certain criteria for teams to qualify for the show. The first being no teams with rookie head coaches. That eliminated the Jags, Rams, 49ers, Chargers and Bills. The second is no teams that have been on Hard Knocks in the last 10 years. That eliminated the Jets, Cowboys, Bengals, Dolphins, Falcons and Texans. The third is no teams that made the playoffs in the last 2 years. That eliminated the Broncos, Panthers, Cardinals, Vikings and Redskins from 2015 and the Patriots, Chiefs, Steelers, Raiders, Seahawks, Packers, Giants and Lions from last year. That only left 8 teams in the running. The Browns, Ravens, Colts, Titans, Eagles, Bears, Saints and the Bucs. Of those 8 teams, the Bucs, Titans and Eagles are the most interesting choices. And of those 3 teams, only one of them has Jameis Winston as a franchise quarterback.

I do see how some fans feel like this could be a major distraction for a young team. My rebuttal to that is that this team may be young, but it’s also mature. Jameis Winston is primarily responsible for that maturity. Despite being only 23 years old, he has stepped right into the “franchise quarterback” role, the captain’s role and a leadership role with this football team and the team has shown the willingness to follow him. In addition to him, they have other leaders such as Gerald McCoy, Lavonte David and Kwon Alexander to help keep everyone level headed. This team will be fine. It’s in good hands. 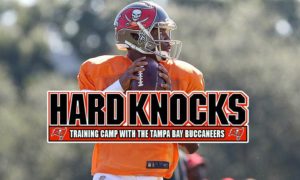 Another reason that I think that the Bucs will be okay through this process is that head coach Dirk Koetter and defensive coordinator Mike Smith have been on the show before with their previous teams. They were both on with the Falcons in 2014 while Smith was also involved in the first season of the show in 2001 with the Ravens. Their past experiences with this process should help the team deal with the ups and downs and ins and outs of being under this microscope.

Of the 11 teams previously featured on the series since it began in 2001, only 5 have made the playoffs. In fact, those 11 teams have combined for an overall 86-90 record. Not what you wanted to hear, right? The good news is that 6 of the 11 finished with winning records of 9-7 or better. The Ravens finished 10-6 after going 12-4 and winning the Super Bowl their previous season. The Cincinnati Bengals went 10-6 in 2009 and 11-5 in 2013 in both of their seasons of the show. The 2010 Jets had a successful 11-5 season after their only stint on the series. So, it can be done. It depends on the experience of the coaches and the maturity of the players.

“Distractions” aside, this will be a unique opportunity for this franchise to be seen by a worldwide HBO audience. We as Bucs fans sometimes whine about the lack of notoriety this team receives from the national sports media. My answer to that is simple…win more. However, even last year when the Bucs were playing well and winning games, they weren’t getting any respect. Hard Knocks should make up for that…and then some.

This team has enough leadership and maturity to turn what could be a negative distraction into a positive opportunity and they have the personalities to make the show fun and interesting. As a Bucs beat writer, I welcome the added material that this situation will undoubtedly bring about, the good, the bad and the ugly. As an avid Bucs fan, I’m looking forward to getting a sneak peek at what goes on behind the closed doors at One Buc. No matter how you feel about it, what’s done is done. Sit back. Relax. Enjoy the show. It should be fun to watch!

DRAFT PROSPECTS: Who the Bucs looked at throughout the pre-draft process

With the NFL Draft next week, the Tampa Bay Buccaneers have been busy looking at prospects from all over the country. From the East/West Shrine game to the Senior Bowl, from the NFL Combine to college pro days and from...

The 2017 NFL Draft is fast approaching us and this year's is one of the more anticipated drafts for Bucs fans in recent memory. For the first time in years, the Bucs are set to pick outside of the top...