The defending Super Bowl Champions come into Ray Jay to try and end Tampa Bay’s 6 game home winning streak. Can the Bucs continue to #TakeBackRayJay and finish the first quarter of the season at 3-1?

Doug Martin makes his return to the Tampa Bay lineup to help the Bucs’ struggling running game. Tampa Bay averaged 84.7 yards a game on the ground without their bell cow and survived with a 2-1 record. Now Martin, if healthy, can build upon a solid pre-season and give the Bucs offense another dimension.

Who else but the GOAT? Tom Brady continues to re-write NFL record books and this year he’s had to do it with a banged up offense and a horrid defense. Even with those deficiencies, Brady is having another banner year at 40 years old. The Pats future Hall of Famer has 10 TDs, no interceptions, has thrown for nearly 1,400 yards and has a completed 66.5% of his passes. The Pats have had to rely on that Brady magic, too, as he brought them back for a victory against Houston and nearly did it again last week against Carolina. Even at 40, no lead is safe when Tom Brady is the quarterback.

The Patriots are bad on defense. Saints bad. Dungy Colts bad. They are literally half a team right now. So the Bucs need to use that to their advantage. First off, you can’t leave points on the field as they did last week against the Giants. Every single point will be precious against the Patriots. Of course, turnovers will be huge as well. Winston has to protect the football, as he did in their other two Bucs wins.  The Bucs need to get a running game going and protect their defense against the potent Patriots offense by controlling time of possession.

When the Patriots Have the Ball

Hold on to your butts. The Bucs defense can’t rush the passer, which means Tom Brady will have all day to throw the ball. Tampa Bay’s defense will rely on it’s secondary and it’s ability to stop the run to try and slow down the Pats attack but the bottom line is, the Bucs need some turnovers from the defense to prevent New England from lighting up those new scoreboards at Ray Jay.

Weird Facts That May Only Be Interesting To Me 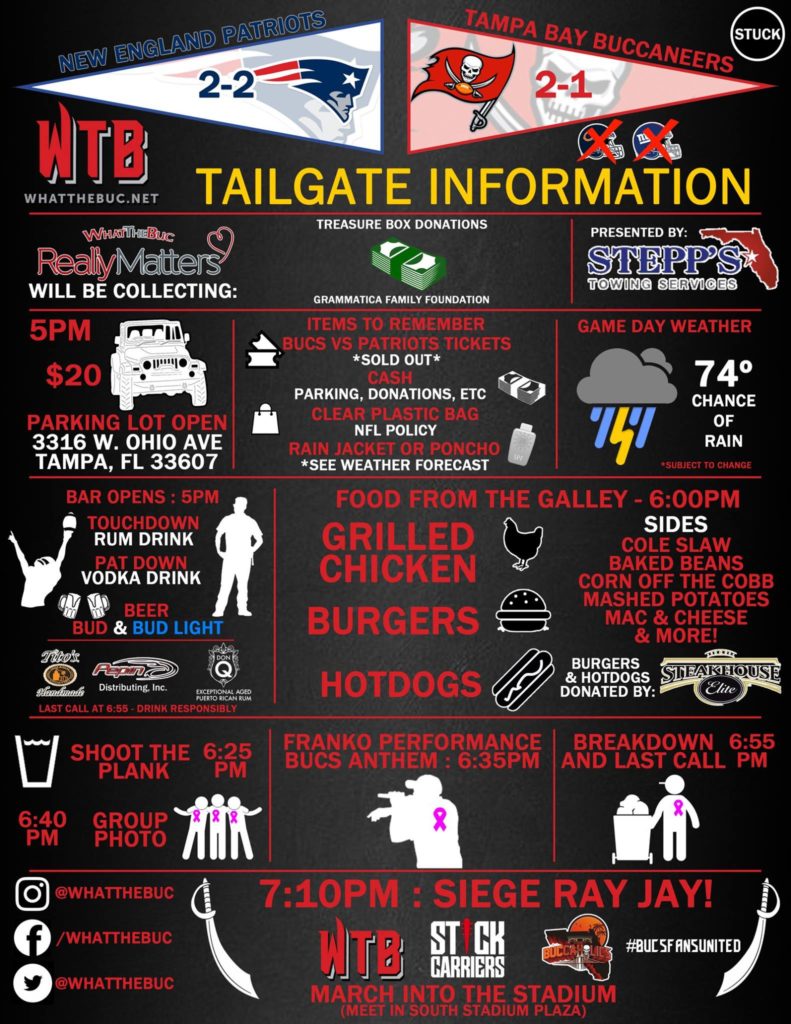 The Curse of Matt Bryant lives, that's all, Folks. Once again, Buc fans are asking what the Folk is going on with their team's kicking game as kicker Nick Folk missed three field goals in a 19-14 loss to the...

Old School won our Weekly NFL Picks in week 4 as the only one of us to get double-digit correct picks. Jon moved into a first-place tie with Simon on the season and me? Well, let's just say don't go to...