Monday Night Football, the eyes of the nation focus on the 2-0 Bucs, curious to see what  “Fitzmagic” is all about. Primetime in America, 1 am Tuesday morning if you live in the UK as I do. As the Bucs were the only game on US TV on Monday, the UK gets the live feed from America on our main sports channel. No need for the pesky Gamepass! For me, this game was all about one thing, momentum. Would we see the Fitzhattrick? 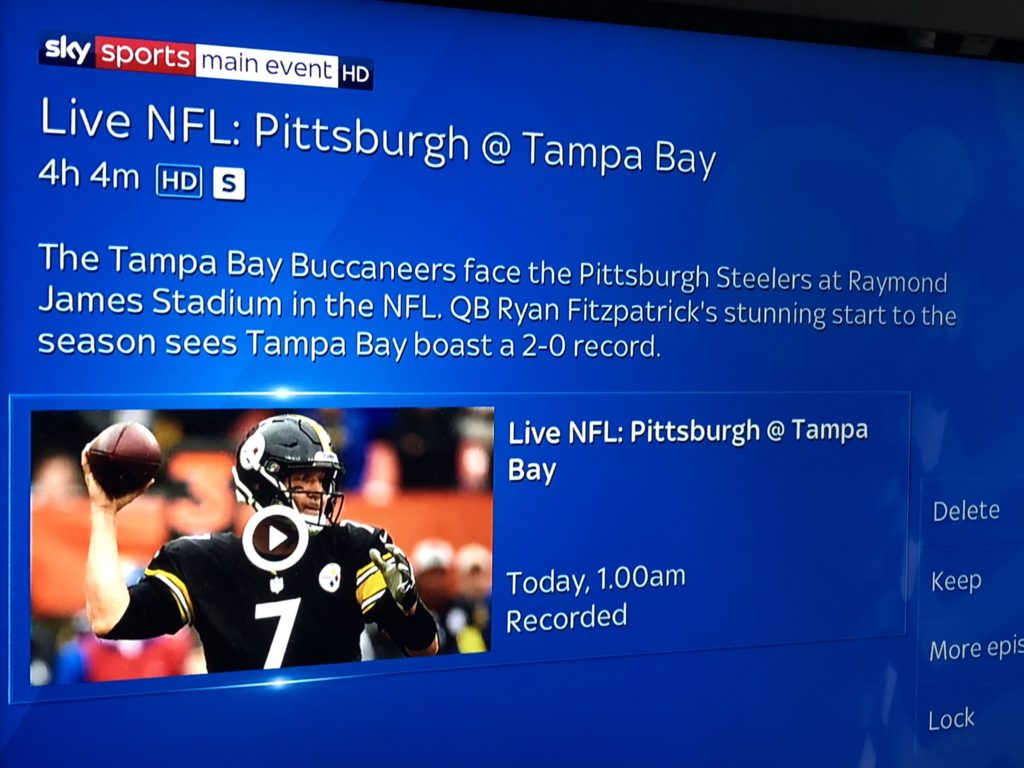 Momentum, as good as it is bad

Coming into this game the Bucs were on an upward trajectory, the Steelers were in disarray. Games like this always concern me, on paper, it felt like we had to take advantage of the Steelers woes. In reality, we were facing a Super Bowl winner and future Hall of Famer in Rothlisberger. If that were not enough, throw in the 6 x Pro Bowler and leading receiver of 2017, Antonio Brown.

When Justin Evans picked off Big Ben, it felt like the momentum trends were not about to change. The Harvard boys connect, it’s 7-0 Bucs and we’re off.

Chris Conte seems to be a love him or hate him kind of guy. Those in the latter group had some fuel added to their fire when the Steelers tight end stiffed armed Conte to the ground and strolled in for a touchdown. Let’s consider the facts for a second. Vance McDonald is 6ft 4″ tall and north of 260lbs. He also had a running start on Conte (more than 50lbs lighter) and as the ESPN commentators mentioned quite a few times, the turf was slippery. I don’t want to make excuses for Conte, he’s a professional and he’ll be annoyed. Late addition as I finish this post, it turns out that Conte was injured too and is now on IR.

If your opponent gives you 155 yards in penalties, the only way you should lose the game is if you keep giving them the ball back instead of scoring. A lot is being said in the media right now about the “new” roughing the passer rule. Ultimately, each team plays by the same rules. If your opponent is unable to stay on the right side of the law, you need to be taking advantage of the penalties.

The pendulum of momentum started to swing heavily for Pittsburgh as the Bucs failed to leverage the opportunities presented. In the blink of an eye, we’re trailing by almost 3 touchdowns.

In 2017 the Bucs conversion rate in the Red Zone was less than 40%. Prior to Monday night, this number has risen to over 65%. It felt like a little like a revert to type against the Steelers, with only 2 of 5 trips to the Red Zone converted. We were not taking the chances created.

Don’t call it a comeback

It says a lot about how the 2018 Bucs are playing, that I stood staring at my screen as we trailed by 3 with a little over 5 minutes remaining, still thinking that we could win. Having powered back from a 17 point deficit, good old momentum was back in our favour. Sadly it was not to be, but I didn’t feel at the end of the game that our run was over. It felt more like a speed bump, we made mistakes, we must learn from them.

The next few weeks are really important. Win at the Bears and you regain some positive momentum, then get a weeks rest. Lose at the Bears, we’re in negative momentum and have 2 weeks to stew on it. That and the small matter of the QB situation.

I don’t know about you, but I need some sleep. Until next time, Go Bucs.

Well, my picks for the Steelers game last week were tight end Jesse James and outside linebacker TJ Watt, Neither of them had much of an impact on the game. Offensively I got the position correct, but the player wrong...

It's an old Black-and-Blue division reunion as the Tampa Bay Buccaneers and Chicago Bears renew hostilities at the venerable Soldiers Field in Chicago. Each team is a surprising 2-1, and looking to finish the first quarter of the NFL season...