Since ’07, the closest the Bucs got to making the playoffs was in the magical 2010 season, when a “Youngry” team proved the NFL wrong and almost crashed the playoff party.

Throughout the off-season, sports writers, analysts and fans alike were united in their pessimism for the 2010 season. People such as Peter King in Sports Illustrated were predicting a 2-14 campaign, everyone expected a losing year and that Raheem Morris would be looking for a new job come January. How wrong they all were. 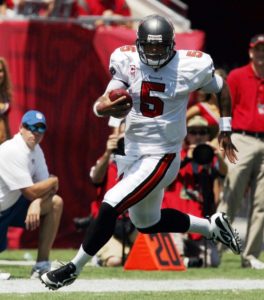 What transpired was a 10-6 season missing out on the playoffs only on a tie-breaker and the biggest influx of young talent probably ever seen in the history of the franchise. Add to that the maturation of Josh Freeman into a true franchise quarterback and the Bucs were now being unanimously seen as a team definitely on the rise around the NFL.

The free agent pickings were limited in the off-season and the Buccaneers had already expressed their preference to build through the draft meaning that only veterans such as S Sean Jones and G Keydrick Vincent were added as the team approached training camp.

But the draft had brought defensive line help in the form of top picks Gerald McCoy and Brian Price, and receiving talents Arrelious Benn and Mike Williams. The development of the latter pair meant that long-time favorite of the boo birds, Michael Clayton, was finally sent packing on the eve of the regular season.

Even a pair of opening victories over Cleveland and Carolina were not seen with any real respect based on the supposed standard of the opposition, and hammerings at home by real powerhouses Pittsburgh and New Orleans did keep the haters in the media and internet world happy for a time.

But the Bucs kept winning the games they were supposed to have a chance to and after Raheem’s “we’re the best in the NFC” boast at 4-2 which got him some national media attention, the victories kept piling up and suddenly games against Atlanta were for the division title.

The young Bucs, now hampered by injuries to defensive standouts McCoy, Price, Talib, and Grimm., came up short against the Falcons and on the road in Baltimore, but a dramatic win in Washington kept them in the hunt going into their final three games.

Losing at home to another up-and-coming team Detroit in Week 15 hurt badly, and in spite of a pair of really impressive wins in the final two weeks over playoff-bound Seattle and New Orleans, the Bucs became one of the few NFL teams to miss out on the post-season with a 10-6 mark.

Josh Freeman outplayed every NFL quarterback over the final month of the season, undrafted rookie LeGarrette Blount came from nowhere to post a 1,000-yard season and Mike Williams led the team with 11 touchdowns and should have won the NFL’s Rookie of the Year Award.

Raheem finished runner-up to the Patriots’ Bill Belichick for the Coach of the Year and all across the roster, he could see young talent and potential. The team followed him like the Scots followed William Wallace and in spite of not selling out a single game at Raymond James Stadium, the 2010 season will go down as one of the best in the history of the franchise.

Training camp is very near and the Buccaneers are going to be heading to New Orleans to play the Saints before you know it. When the NFL releases it’s schedule for the season, many fans look at their team’s schedule...

Are the Bucs Better at Coaching?

Change is constant in the National Football League. If a team does well, offensive and defensive coordinators become head coaches. If it does poorly, many coaching staffs may lose their jobs. For coaches, the N.F.L. stands for Not For Long,...