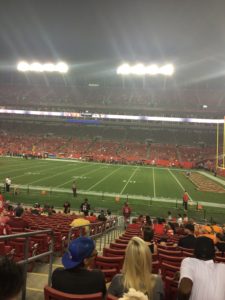 There I sat. The first game I was able to go to this season and boy oh boy was it bad. The Tampa Bay Buccaneers played their rival the Atlanta Falcons. It would have been huge to win this game. Unfortunately, the Buccaneers were not able to get the job done as the defense was manhandled by Matt Ryan and the Falcons offense. The Bucs lost 43-28 and have most likely put themselves out of reach for the playoffs.

Sadly nobody else was able to make this list. Better luck next game.

So yes, playoffs may be out of the picture this year. Lets just hope for some improvement over these next couple if games. Just be competitive, no blowouts, no embarrassments. Bucs fans are some of the best fans in the world but maybe some of them also have to look in the mirror. GO BUCS!

16 year old with aspirations of becoming a writer or contributor to some form of media. I have been a Bucs fan my whole life and have followed the team's every move. My goal is to develop as a writer as this is what I would like to do as a career when I get older. I hope to become one of the best writers here, at the end of the day the WTB team is one family and we are glad to have you visiting the website. I hope that everyone enjoys the content myself and the rest of our great writers are able to put out. I would also like to thank Derek 'Old School' Fournier for giving me the platform and helping me in taking the first step to writing and covering the Tampa Bay Buccaneers. GO BUCS!

The Tampa Bay Yucks Are Back…YAY!!!

As usual, Bucs fans entered into this 2016-17 season with eagerness, excitement and hope. Eagerness to see how this "more aggressive defense" would look under Coach Smith. Excitement to see the already successful offense in it's second year under Coach...

The Tampa Bay Buccaneers get to go on primetime for the second time this season. The first time was a Monday Night Football win against the Carolina Panthers. This game is against another divisional opponent in the Atlanta Falcons. The...