The Bucs and Eagles restore their hostilities Sunday at Raymond James Stadium. These two teams have been part of some epic games, from the Bucs first ever playoff victory in 1979 to Ronde shutting down the Vet and You Go Joe opening up the Linc to Matt Bryant’s 62-yd FG to Jameis Winston’s 5 touchdown pass day, it’s been a wild ride for both teams. Some of the greatest and most disappointing moments in Bucs history have come against Philadelphia.

Will Sunday be another day to remember? We hope so, but in the meantime, here are some things to watch out for.

In the last 10 season, the Bucs have started 1-1 in 6 of those seasons, and have started 1-1 in each of the last 3 years. The last time the Bucs started 2-0 was in 2010, which coincidentally was the last time this team had double-digit victories. After starting 1-0 each of the last two seasons, Tampa Bay got their clocks cleaned in the following week. In fact, in the last 5 years, the Bucs have only once avoided a 1-3 start to the season, last year, when they started 2-2.

If the Bucs win on Sunday, not only will they be 2-0, but they’ll get two shots at their first “winning September” since 2011.

Can Fitzmagic Trump the Philly Special?

We all know what happened last week. With all due respect to the New Orleans Saints, the Eagles are a much superior defense. Philadelphia’s defensive line is no joke. They come at you relentlessly and in waves. They are eight deep in talented defensive linemen attacking the offense. The Bucs offensive line dominated Cam Jordan and the Saints, but Cam was one guy to stop. With Philly, you have to account for Fletcher Cox, one of the best interior defensive linemen in the league, Brandon Graham, Chris Long. Heck, Michael Bennett, the former Buc, and Seahawk is a DEPTH player on the Eagles d-line.

If the Tampa Bay offense can keep Fitz upright, the offense can have a chance to succeed. The interesting thing is the Bucs didn’t just do this last week. All Pre-Season, we saw these offensive weapons terrorize their opponents, no matter who was at quarterback or who the opponent was on the field.

Will the Defense Finally Rise Up?

We all see the talent. Vinny Curry. JPP. McCoy. David and Alexander. Justin Evans. There are talented players at every level of this defense. They can’t continue to be this bad. At some point, the light must pop on and these guys start playing like a cohesive unit that stops opposing offenses dead in their tracks.

Nick Foles has struggled throughout the pre-season and was awful in Week 1. If he suddenly gets well against the Bucs – then the serious conversation needs to begin about defensive coordinator Mike Smith’s job security.

The Bucs ran for 121 yds against New Orleans in Week One, but that number was inflated a little by Fitzpatrick scrambles. Tampa Bay needs to help their defense by being able to sustain some long drives against Philly, pounding them repeatedly to get as that Florida heat bears down on them. It won’t be easy, the Eagles boast the 7th best defense against the run in the league after Week One and were 1st in run defense last year.

Tampa Bay needs some big runs from Peyton Barber, who started off well but petered out against New Orleans.

Who Let The Dogs Out?

Once again, the Bucs are underdogs heading into Week Two. It might be the best thing for them that they are facing the defending Super Bowl Champions heading into the second week of the season? Why? The past two years, the Bucs got pretty high on themselves after Week One, only to fall flat on their faces in Week Two. There’s no one in that Bucs locker room taking the Eagles lightly this week. I expect the Bucs to come in and give it their best shot.

The Port in the Storm

Don’t forget to stop by the only Hall of Fame Tailgate in Tampa Bay, the WhatTheBuc tailgate! We have been your port in the storm. Come drink, be merry and get ready to cheer your Buccaneers on to victory! 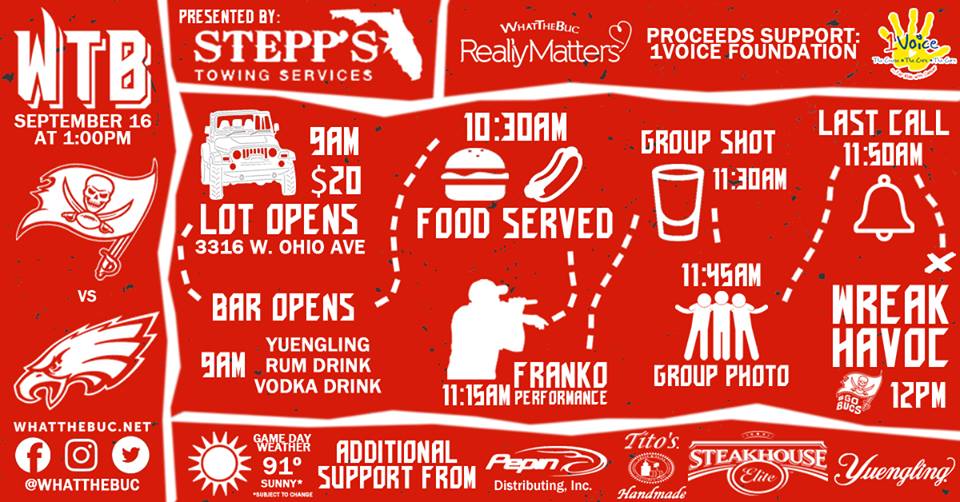 Can you feel the magic? What magic you ask? FITZMAGIC of course! The Buccaneers came into this game against the Eagles as the underdogs again. Well the underdog Buccaneers beat the top dog Eagles by a score of 27-21. This...

WTB and the WTB Tailgate – Your Port in the Storm

No doubt by now you have seen the chatter about this season. Week 1 woke a few people up as our Bucs traveled to New Orleans and, despite a 3% chance, walked out with a win. Being a Bucs fan has...