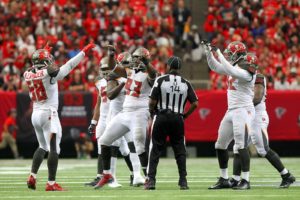 An angry Buccaneer team will play host to the Los Angeles Rams for their home opener in Tampa Bay on Sunday. The Bucs will have the opportunity to show their resilience after the beat down they received at the hands of the Cardinals, which proved that red birds on helmets are bad news for Florida teams at any level of football. This week, Tampa Bay faces a much different team than they played in Arizona. It’s a great time for revenge, not only for last week’s loss, but more directly on a Rams team that has had the Bucs’ number in recent seasons.

The Buccaneers will redeem themselves, and show the national media that they were right to expect bigger things out of Tampa Bay this year. The Bucs will keep Gurley scoreless, and limit the rest of the offense to just one touchdown. Mike Evans finally gets over the 99 yard hump, and has a big day with over 100 yards receiving. The Buccaneers win and delight the fans in their home opener, 28-10.

Thomas Sandberg is a life-long Buccaneer fan who hopes to entertain, inform, and enlighten you. He played numerous sports in his youth and served as an army airborne infantryman after high school. He currently works in internet marketing, but is interested in making sure that his writing about your Buccaneers holds your attention long enough to make it worth your time.

Tailgate is coming, here are some of the rules

We have a rules page and a ton of info but nothing works better than a quick video. If you are gonna join us on gameday, and we recommend that you do, take a view, meet some of our team...

DO NOT PANIC, Bucs fans…..everything is going to be ok!

Ok, so I swore that I was going to put that horrific Cardinals game behind me and move on to the L.A. Rams...but after seeing so many negative posts and comments on social media, I felt compelled to say something. Yes,...