My third installment of the “Welcome Aboard”  series is another player that few fans know about but should get to know because he could end up being a vital part of Dirk Koetter’s offense should he make the 53-man roster. The question is, will he make it? His performance in camp could mean the difference between the Bucs keeping four tight ends and one fullback or five tight ends and no fullbacks. We’ll know in a few months.

Last year, Dirk Koetter ran his Tampa Bay Buccaneers offense without a true fullback on the roster, electing to utilize five tight ends instead. This season, he could be faced with a similar decision, but with a slight twist. This year, he’ll have a legitimate fullback in training camp which could influence that decision. In 2016, blocking backs Luke Stocker and Alan Cross were used in dual roles as tight ends and fullbacks depending on the formation. In 2017, it could be a different story. 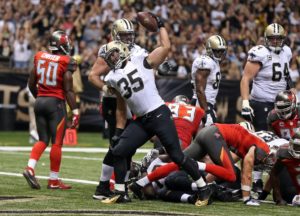 Back in December, the Bucs actually signed a true fullback to their practice squad named Austin Johnson. That name may sound somewhat familiar to some hardcore Bucs fans seeing as how he’s spent the last two seasons with our NFC South rivals the New Orleans Saints. He was used sparingly in 17 games over those two seasons accumulating 31 yards rushing, 45 yards receiving and 2 touchdowns in that span. He also saw quite a bit of action on special teams where he racked up 9 tackles.  At 6’2″/240lbs, he was signed as an undrafted free agent out of Tennessee by the Baltimore Ravens after the 2012 draft. It wasn’t until January of 2013 that he signed on with the Saints, spending the next two seasons being moved back and forth between the practice squad and the active roster.

He actually switched from fullback to linebacker for the Vols in his junior and senior seasons totaling 125 tackles, 8.5 tackles for loss and 5 interceptions. In July of 2011, he was arrested and charged with public intoxication and disorderly conduct resulting from an altercation outside a bar. Charges were later dismissed.

As I said before, a strong showing in training camp by this guy could cause ripples across the rest of the roster. The tight end competition will be tough enough without throwing a fullback into the mix as well. Should the Bucs decide to keep a fullback AND five tight ends, they’ll have to make a cut from another position group to make room. Mind you when I say “strong showing”,  I mean a very, very impressive showing. He’ll need to in order to take the place of either Stocker or Cross who both have the versatility to play fullback and tight end. And Koetter and Licht really like versatile players.

This year, the NFL has changed the rules for teams making cuts during training camp. Previously, there were two main cuts from a 90-man down to a 75-man roster then from the 75-man to the actual 53-man roster. Now there is only one cut from the original 90-man training camp roster to the 53-man regular season active roster. Which means we’ll have to wait until late August to find out the fate of Johnson and the rest of the guys. Until then, as always…GO BUCS!!!

Continuing my "Welcome Aboard"  series, this next piece is about recently signed linebacker Jeff Knox from the Canadian Football League. This isn't the first time the Bucs have gone up north to find talent. In fact, they also signed wide...

This is a new series that I'm starting to occupy my time until training camp starts. In these "Welcome Aboard"  pieces, I'll be introducing Bucs Nation to some of the "under the radar" players that the Bucs have signed or brought...