Continuing my “Welcome Aboard”  series, this next piece is about recently signed linebacker Jeff Knox from the Canadian Football League. This isn’t the first time the Bucs have gone up north to find talent. In fact, they also signed wide receiver Derel Walker from up there too. The last time the Buccaneers signed a linebacker from the CFL was in 1997 when they found a small, undersized player named Shelton Quarles playing for the British Columbia Lions. He only turned out to be a pro bowler and a Super Bowl champ at middle linebacker and is now the Buccaneers director of player personnel. If Knox reaches anything close to that, this could be one of the best free agent signings of this offseason.

Knox is a fast athlete. He began his college career at the University of Pittsburgh but was suspended a month into the season after being arrested and accused of assault on a female. He wanted to play football so he transferred schools. As it turns out, the female “victim” admitted that she had lied about the incident and the charges were dropped. His freshman year at California University of Pennsylvania, he played cornerback and helped fill in at running back due to injuries totaling with 280 yards rushing and 10 touchdowns along with 21 tackles and 2 passes defensed while playing both ways. In his sophomore year, he played at safety and was the second-string running back where he had 205 yards rushing and 9 touchdowns with 38 tackles and 1.5 tackles for loss.  He played primarily at running back during his junior season due to injuries in the backfield and had 507 yards rushing with 5 touchdowns. He was moved over to 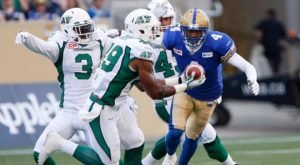 strongside linebacker for his senior year after gaining some weight and flourished in 7 starts out of 10 games while producing 59 tackles, 11.5 tackles for loss, 7.5 sacks and 4 forced fumbles.

He signed with the Saskatchewan Roughriders out of college after going undrafted. He was named the team’s “Most Outstanding Player”  in 2015 after totaling 114 tackles, 10 special teams tackles and 1 interception in his rookie season. He was also voted in as a West All-Star which is the CFL equivalent of the NFL’s pro bowl. In his second year, he finished with 65 tackles, 19 special teams tackles and a sack before being released to pursue some NFL opportunities.

The Bucs inked him to a 3-year reserves/futures contract back in January. He joins a LB group that includes starters Lavonte David and Kwon Alexander, starting SAM LB hopefuls Devante Bond and rookie Kendall Beckwith, last year’s backups Adarius Glanton and Cameron Lynch, and undrafted free agents Paul Magloire, Riley Bullough and Richie Brown. The competition in training camp should be heated with 6 players battling for what will likely be the last 2 LB roster spots, but with his speed, Knox should be able to earn one of them. We’ll find out here soon enough but until then, as always…GO BUCS!!!

Next up in my "Welcome Aboard"  series is another standout from the Canadian Football League in wide receiver Derel Walker. The 6'1"/190lb speedster is a former teammate of Bucs superstar wide receiver Mike Evans at Texas A&M and will be in training camp...

My third installment of the "Welcome Aboard"  series is another player that few fans know about but should get to know because he could end up being a vital part of Dirk Koetter's offense should he make the 53-man roster....