One thing that I’ve realized over my 35 years or so of being a Bucs fan is that most Bucs fans, and maybe most NFL fans in general, can be fickle. This is no more evident than during and right after the NFL Draft. Football fans have their versions of their “perceived needs” for the team, whether they’re justified or not. Many times those “perceived needs”  differ greatly from the team’s ACTUAL needs (Editor’s Note: “ACTUAL” here is also a matter of opinion. It is the opinion of the people paid to make that decision but still no more FACT than any other stance. It is, most times, a better conjecture based on far more information.) One prime example this offseason was some fans idea that the Buccaneers needed to revamp their “porous”  offensive line. This has been an ongoing debate amongst Bucs fans for the past few months despite what Jason Licht and Dirk Koetter both continuously said throughout this entire offseason, which was that the Bucs are genuinely happy with the o-line group that they have right now. And yes, they’re even happy with left tackle Donovan Smith’s progress after a somewhat rough first half of the season last year. Some fans just refuse to listen. Some fans just refuse to acknowledge it. Some fans think that reading some website’s “breakdown”  of the Bucs offensive line or one of their linemen gives them all the information they need to draw their own conclusions. Some fans continue to trust their own amateurish hypothesis formed from watching a handful of games each year instead of trusting the well informed, educated opinions of the men who watch countless hours of game film, who watch every snap of every practice and are with these men in every team and positions meeting every day. I saw plenty of fans get frustrated when the Bucs didn’t sign a new left tackle in free agency. And I saw those same fans get downright pissed off after watching the Bucs NOT pick any offensive linemen in the draft. My thought every time I see this is simply, “I told ya so!”  and for whatever reason, those fans just don’t want to admit that they’re wrong…no matter how many times they’re proven to be that way.

(Editor’s Note: This is the ESSENCE of sports debate. Are you (Jon) saying fans should simply swallow whatever the team puts out?) 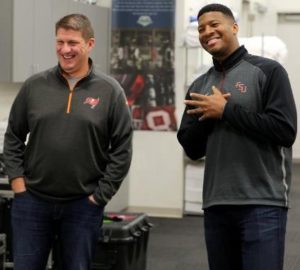 Another “perceived need”  that I saw a lot of was at running back. And not just from some fans, but from NFL analysts as well. It’s somewhat understandable considering the Doug Martin situation, but I found it odd that so many fans were so ready and willing to turn their backs on one of OUR current Buccaneers just because of how bad they wanted the Bucs to draft their college team’s running back (Do I really need to get specific with which one?). Obviously, when the Bucs passed on said running back and filled what was an ACTUAL team need in a dual-threat tight end, it showed these fans once again that they were incorrect in their ASSumptions. As of now, it looks like the Bucs bandwagon will be hitched to the current stable of running backs with Doug Martin once again being the lead horse.

As far as this 2017 draft goes, I for one am very excited about Jason Licht’s picks. All of them. I’m ecstatic about their 1st round pick. I think that was who they wanted all along and they couldn’t believe he fell to them. I was surprised but happy with their 2nd round pick. I love their first 3rd round pick and am intrigued by their second 3rd round pick. Their 5th round pick was a steal and their 7th round pick is solid (Literally, he’s 6’2″ and 330lbs). They filled almost every ACTUAL need on this football team and picked six players that they really wanted all along. Jason Licht once again showed his draft genius. And yet, I see plenty of so called Bucs fans talking about how “terrible”  this draft was and that Jason Licht should be fired. SERIOUSLY PEOPLE?!?!?  Just because he didn’t pick YOUR college team’s running back or draft any offensive linemen or draft the safety that some of you wanted in the 2nd round, doesn’t mean that this was a “terrible draft”.

(Editor’s Note: Is it only the fans that wanted Cook (I assume that is who you are referring to) that you hear bitching?)

In just three years, Jason Licht has brought this team from a 4-12 perennial NFC South basement dweller to a 9-7 team on the verge of the playoffs last season. In just three drafts, he gave us a franchise QB and built one of the most complete football teams that this Bucs fan has ever seen in Tampa Bay. And he’s done it the right way, by building through the draft and supplementing through free agency. Just like he said he would when he was hired. It’s time for Bucs fans to stop the complaining. It’s time to start celebrating. It’s time to start believing in Jason Licht and trusting his process. We have entirely too much to be thankful for and be excited about as Bucs fans. Not only do we FINALLY have a playoff team back in Tampa Bay again, but we may even have a contender for years to come! Only time will tell but until it does, as always…IN LICHT WE TRUST & GO BUCS!!!

Let's admit it, the Bucs had an important draft in front of them. They had a plethora of needs with safety and tight end being two of the biggest ones. Did I forget to mention weapons for Winston? All of...

My WTB “WTF?” Mock Draft…let’s have some fun, shall we!

Ok, so far I've released four mock drafts. Two of them used the Buccaneers original seven draft picks and two more that included various trades resulting in 11 picks by the Bucs. This time, I've decided to think out of...