I listened to the recent podcast announcement of the proposed Bucs fans groups coming together, whilst out on a run. Despite my legs aching and sweat pouring down my face, I felt a smile creeping in. Not just because the sense of togetherness between the Bucs fan groups sounded amazing, but also as it drew some comparisons once again to my UK football team who I have mentioned in previous blogs.

The word that was regularly used, was together. Let’s take back the Raymond James, together. Create an atmospheric force to be reckoned with, together. We shall drink beer and eat food, together. Sometimes togetherness is overlooked as a force that can be used, for free, for good. We are so absorbed in our own lives that it often takes a moment of tragedy for us to come together for good and that shouldn’t be the case.

Look at everything happening in Houston in the wake of Hurricane Harvey. The local community, supported by the generosity of many who have probably never been to Houston, are rebuilding homes and lives and doing so, together.

As I loosely mentioned, the togetherness reminded me of something that happened recently for my UK football team. In an effort to bring some noise back to the stadium, a fan group called Along Come Norwich rallied the troops and some other fan groups ahead of our opening game.

The plan was a fans march! Everyone would converge on a pub a few minutes walk from the stadium. They would then march as one to the ground, singing, and cheering and bringing the atmosphere. By all accounts (other than the result of the match) it was seen as a success. Local media covered it, there was a buzz on social media and a lot of people joined in.

Once I heard of the plans for the Bucs fan groups, I reached out to Jon Punt from Along Come Norwich and asked him a few a questions.

How did the march come about? What were your hopes for it?

The idea of a unity march prior to the Sunderland game was born out of a genuine desire to improve matchday atmosphere. We’d looked at other supporter groups such as Forza Garibaldi or the Holmesdale Fanatics and seen the engagement work they did prior to games seemed to be manifesting itself in the stands. Barclay End Norwich are the real leaders in terms of moving forward this agenda. At Along Come Norwich we’ve been helping to relay their messages and supporting what they do, both vocally and financially (through profits of t-shirts we have recently sold). 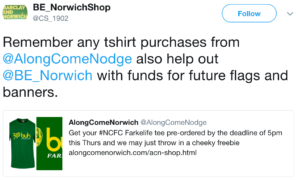 The hope was for like minded fans to come together and make a great atmosphere before the game, which would then transfer to the fans in stands.

How many people were you hoping would turn up on the day? How do you see this evolving in order to be a regular thing?

In terms of a number we had no real idea who would turn up, and how vocal they’d be. The results surprised us all, with at least several hundred in attendance, all ready to turn up the volume.

As far as the plans moving forward, there may be two or three similar events during the season, with other regular meet ups too. We’re open to ideas, however, and if supporters want to get in touch with us, we’re all ears.

For Norwich, we are as I type this on an equivalent of a bye week. The teams are afforded a break when the international teams play. Prior to this, we lost 4-0. We could do with a helping of “together” right now.

For the Bucs – Hurricane Irma is having a say in the final preparations for the Bucs season.  A season which will now begin, at the Raymond James. So how about a dose of “together”. The fans can crank up the noise against the Bears, giving the team a clear notice, we’re here, together.

Be sure to check out all of the excellent content on site ahead of the new season, as well as my previous blogs on being a Bucs fan in the UK.

To all of the Bucs fans and their families in the areas due to be affected by Hurricane Irma. We hope that you stay safe and we look forward to sharing a beer in the near future.

The NFL Season is upon us and as is the great tradition of all football-centric websites, we give you our NFL Week One picks. So Say We All We all agreed the defending Super Bowl Champion New England Patriots would...

WOOHOO, the preseason's done! Now that the practice games are over and the REAL football is about to start, the Bucs (and every other NFL team for that matter) are about to cut their roster down from 90 to 53...