I have to admit it. I didn’t see this coming. It’s not that I doubted Justin Pawlowski’s influence on the Tampa Bay fan base. Folks loved his shows on 620 WDAE and later the ill fated 98.7 the Fan. When he started his podcast, Bucs Uncensored on Joe Bucs Fan, it was just nice hearing Pawlowski on the airwaves again. I didn’t get a chance to listen often, so my first experience with the “Stick Carriers” was Draft night. I was a little surprised at the mob-like intensity of the group. It seemed to be small, enthusiastic movement but as I listened to the show I worried a little. They seemed a bit confrontational, attacking journalists over the airwaves and social networks who they feel slighted the team (or them) in some way. 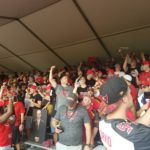 Old School mentioned it in many of the podcasts on WhatTheBuc. Yes, it’s great to have a rabid fanbase, but don’t be the jerks like Philly fan or in Old School’s case Seattle’s 12.  I was worried this would be what the Stick Carriers were.

Today at training camp, the Stick Carriers took over the practice and showed us what they are. A group of passionate Bucs fans. Had it always been here? I think so, I just think there wasn’t much to rally around or someone to coordinate that energy. We saw some rabid fandom back in the Pewter Power days of Dungy and Gruden. Raymond James Stadium used to be a tough place to play for opponents. Yet, as the losses mounted, the regimes changed and it felt like the fan base lost its desire and support.  What The Buc and a handful of others had to wade through the misery of the Bucs fans who stayed on. It was tough to be a fan then.

The energy in the stands changed, too. There used to be nothing like going to a game at Ray Jay but it truly became a miserable experience for long time fans. As the “bandwagon fans” departed, obnoxious opposing fans would take over the stadium, almost making it feel like you were at an away game. The players felt it too. Coach Koetter mentioned the team had to go to a silent count in their own stadium some days.

For a long time, it felt like the What The Buc tailgates were the only place we could find passionate Bucs fans who still lived and died with this team so to say I was a little skeptical that the Buccaneer fan base could be whipped up into a frenzy is an understatement. I thought those days may be gone. Believe me, I didn’t throw any shade toward Justin’s movement, I just doubted it would amount to much. Many other outlets kind of felt the same.

I’m happy to report I was dead wrong. Not only is this movement growing, it’s a marvel to see. I’ve seen the Bucs fans at their lowest and I’ve seen them at their height. I’ll be honest, I’ve never seen anything like what we witnessed at One Buc Place today. The chants, the singing, the calling out of players names – hell, they cheered out the name of the third string quarterback “Ryan Grif-Fin! Ryan Grif-Fin!”. I also want to commend Pawlowski and his Captains for keeping it orderly and respecting the authority of the security team (whom I’m sure was nervous as heck).

The energy was felt on the field. Coach Koetter and GM Jason Licht came over to acknowledge the crowd. The players basked in their support. It was stunning and I loved it. I now truly believe in the #StickCarrier movement. I think that this group goes beyond the 5,000 that packed practice today. Not only that, I’m certain other Bucs fans will feed off this energy and want to be part of it. If 65,000 fans are feeding off the Stick Carriers energy, so will the team and every game will be like the Seattle game last year.

That’s old school support. That’s the way it used to be and can be again – but maybe this time it will be better than ever.

Congratulations to Justin and Joe Bucs Fan for taking this thing to the next level. Speak softly and carry a #BMFS.

Today our WTB family shared in the Zeller family's loss. Richard Zeller, a mainstay in the Bucs community, loving husband and amazing father passed away. This is not a formal obituary, simply a note to a friend. Richard was always...

Florida showed up today folks. The clouds were nowhere to be seen and the team got a taste of Florida summer in full pads. QB play was sharp across the board and the offense was able to make some progress...