On the hallowed ground of Lambeau Field, our Bucs get a chance to become the first team to play for a championship on their own home field (and in their own home locker room)

In 20 Degree weather, the “Battle of the Bays” I remember from the 80’s will really mean something. Like many Bucs fans, I grew up listening to Gene Deckerhoff (not because we were blacked out as Packers fans always poured into the Sombrero, but because radios were portable) while we played football in the Florida cold. Yes, it used to get cold here and 35 degrees with humidity will kick your ass! The sting of the ball hitting your hands hurt but not as bad as the losses and the thought of those fans turning our stadium into Lambeau South.

I’ve been to Lambeau.

I’ve been to Canton.

It is the embodiment of football. It oozes history and while Canton is the Hall of Fame and spectacular, having been with the amazing folks in Lot 1, it is easy to see how this place is revered and how this team carries a different gravitas.

Many of us lived through the pain. The days where the Creamsickle got us made fun of as our local friends pulled for the Cowboys or Steelers who owned that time period. A brief respite came in ’79 when we found success and started to get the flavor of excellence with Lee Roy Selmon, David Logan, Doug Williams and Ricky Bell (amongst others). We watched our owners flush that opportunity down the drain and many of us knew it was the intrusion of the real world into sports.

It was terrible, and our franchise was cursed.

A decade and then some later, Coach Dungy came and rebuilt this franchise, piece by piece. He and the staff helped restore pride to the Bucs and set the trajectory for our ultimate victory in 02. I remember painfully “fans” making fun of his house being for sale when he couldn’t “Seal the deal,” in the playoffs and clearly deserved to be run out of town.

Lucky for us, the pivot (an expensive one) to Gruden led to immediate success and an extension of relevance. But after that soured, we got to taste another decade plus of pain in response to our chosen path. A turnstile for leadership and the same rinse, repeat pain that us old fans were so familiar with. Bad drafts and misses in free agency.  Cheap years and shopping sprees both met with a seeming cosmic smack in the face as our Bucs became a laughing stock once again. 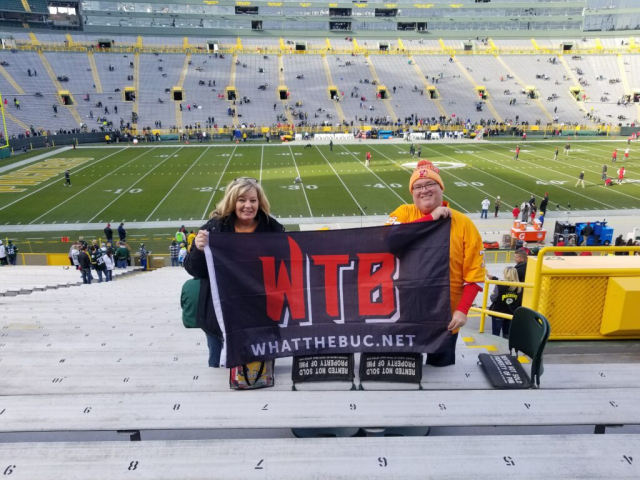 During this time, our merry band of often do wells found each other and WTB was born. We tailgated through misery and found reasons for joy. Brought together by football, this international band of lunatics chalked up a lot of firsts but the most exciting thing is that they continue to exude passion and have helped others find their voices and make their own differences in the fanbase and in the world.

I am excited for those fans now. We talked of hope and threw Season Kick Off parties always trying to leverage the hope that springs eternal in sport only to be left at the water cooler year after year bemoaning what could have been. We grew to know (too much) about our team; got to learn too much about the humans that play for it at times but also made enduring friendships and bonds with people all over the world, in the media and down the street. We saw people married and divorced. We saw new fans born and grieved together when our friends passed away. We did that all under the flag of our Buccaneers who sometimes forced us to drink and other times inspired us to drink but always gave us a reason to come together. 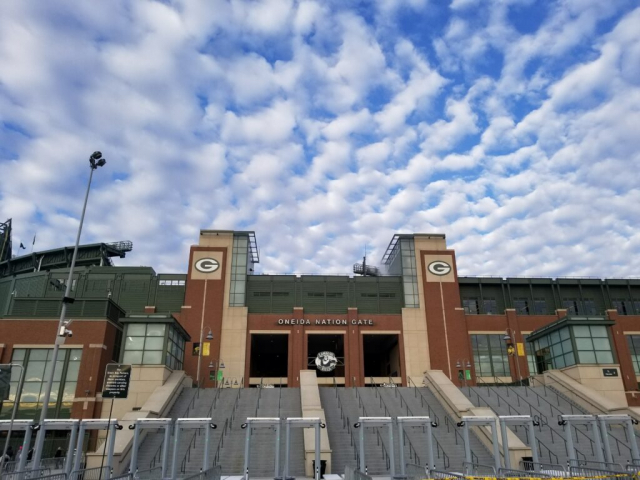 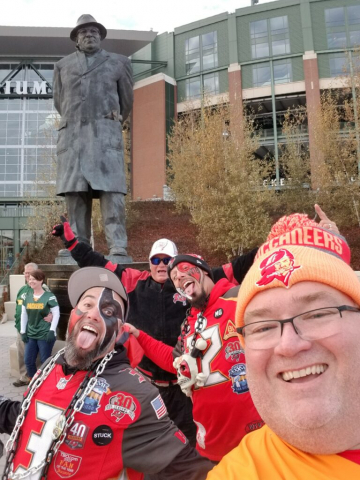 The days of 10 wins and being competitive,  which our community had determined previously wasn’t enough, was suddenly the thing we craved and dreamt about. (Hearing the GMFB folks discuss the recent Saints run in similar terms is eerily familiar). If success breeds complacency, then the absence thereof must breed desperation. Because as a fan, I think I share that feeling of desperation with others out there.

When the team announced the arrival of Brady (and later Gronk, Fournette and others) it felt like a reach. It felt like another Hail Mary but this time, with the GOAT. Could he elevate our team which always seemed to have raw material, but could never come together? Could our line finally come together? Could the defense return to previous glory, albeit under a new scheme and with what seemed to be so many holes?

Well, the season unfolded with the predictable amount of ups and downs. For all the good Social Media has done, the knee-jerk, half-cocked shit I used to say on my podcast were at last limited to twice per week. (Well, until Social Media took off). Now, the kind of crazy shit you read within seconds of kickoff would make Mother Teresa drop an F-Bomb.

But that is a window into fanaticism. It has some dark and scary shit lurking under the covers and is usually amplified by ignorance. Once shouted into that void, the echoes loom large. But as the year wore on, the team persevered. The leadership persevered.

The plan, was working.

It was always about growing and improving while securing an elusive ticket to the dance. Our Bucs had the talent, but talent is NOT enough (See Eagles Dream Team). Could the team become a TEAM?

Our TEAM got their ticket and knew the only path to the Super Bowl would likely be all on the road, route through the Big Easy and end up with a bouncer at the door to the Championship wearing a Cheesehead and eating a Brat.

No easy path. No fluke team can run that gauntlet. Championships take guts, depth, passion, effort, intensity, focus and a little luck. They are rare and elusive and after so much pain, the mere scent of success is so intoxicating, the local bars need not open (though I hope they can very soon for a million reasons and for some fantastic people).

The win in Washington was supposed to happen. It set up the chance to prove that this team could learn. That it was not afraid.

The win in New Orleans was defining. We vanquished the dragon and took back the pride we lost in that ass whipping at home.

The trip to Green Bay through the hallowed ground of Lambeau seemed destined. After dispatching of fellow future Hall of Famer, Drew Brees, now Tom Brady and the Bucs must once again defeat Aaron Rodgers and his Packers. When we beat them earlier in the year, they were lauded as the best in the NFL and who have seemed to get only stronger. Note, after they lost to us, the mainstream media derided them as (potentially) a fluke for having gotten their asses handed to them in Tampa.

I’d love to talk about the possible Super Bowl matchup should our Bucs be successful in Green Bay but to be honest, I want to enjoy the next week. The football foreplay is worth it (ain’t it all), as it leads to those amazing 60 minutes and ideally, the climax we all hope for. (Sorry for the extended metaphor)

These chances are rare fellow fans.

Enjoy each minute of excitement and hope and let’s ride this thing till it Bucs us!

If our team deserves it and plays to their potential, we get to say that one more time.

If you read this far you are a trooper. I am nostalgic and needed to purge some of this. Sorry for the poor editing but it was stream of conscious.

To all the WTB folks out there, the Buccaholics, the fanatical fans with and without labels, I am so happy for each of you. I have cheered with you and cursed with you. (Sometimes at you) This run is special and I hope we can make it all the way to the end.

As many of you know, we had a great run of consecutive tailgates. Our charity focus was clear and our doors always open. This year presented unreal new challenges so our official tailgate was stopped. Our great friends at Bucs...

It Took a Pandemic to Stop Us

This article is the sole opinion of the author. Our Krewe is proud, talented and passionate. While I may be emotional and mushy as hell right now, the positions put forth here are not meant to be the words of...