A team that had won just 7 games in their franchise history came within 9 points of the Super Bowl. That was part of the amazing story of the Worst to First 1979 Tampa Bay Buccaneers.

The 1979 Tampa Bay Buccaneers remain the first successful team in franchise history. A regular season with ten wins, the first playoff success that the team has known, and were within ten points of going all the way to the Super Bowl in only their fourth season. And the Bucs of that year were not just heroes in their own area, they were heroes across the nation. Those loveable losers from Tampa Bay, who just two seasons ago, still had not even recorded their first franchise victory, now on the verge of becoming one of the NFL’s elite.

“Ain’t no stopping us now” was a No.1 chart success for McFadden and Whitehead in the summer of 1979, and quickly became the theme tune of the Bucs, led by their fearsome defense that ranked as the best in the entire league. The patient building that John McKay had advocated, was now seen to be paying dividends, although there were still areas on the team that were obviously not as good as the others. 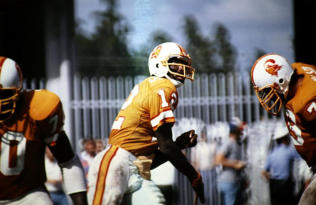 McKay went into his fourth draft looking for additional offensive depth having traded away his first round pick to Chicago for defensive end Wally Chambers. He had once been a premier pass rusher during the early 1970s, but was past his best. Still, a washed-up Wally Chambers was still an improvement at left end and for the 1979 season, gave the Bucs a pair of premier ends to rush opposing quarterbacks. Another draft pick went to the Dolphins for nose tackle Randy Crowder, in Don Shula and Joe Robbie’s doghouse for being arrested during an undercover drugs investigation. Little did the Buccaneers know that their very final pick in the 12th round, would solve their nose tackle position problem for most of the next decade, as David Logan became a Tampa Bay player.

Offensive help came in the form of lineman Greg Roberts, a starter by mid-September at right guard, and running back depth in the form of Jerry Eckwood and Rick Berns. Eckwood became the starting full-back at mid-season and led the way for many of Ricky Bell’s 1,263 yards that season. Gordon Jones was a profitable receiver for four seasons, while former defensive end Gene Sanders, an eighth-round pick, moved across to the offensive line and started several years at the right tackle position.

One final notable name from the 1979 draft was quarterback Chuck Fusina, who spent three years charting plays behind Doug Williams. His success came in the mid 1980s as the starter for the Baltimore/Philadelphia Stars of the USFL and played in the Wembley game in 1984 against Steve Spurrier’s Tampa Bay Bandits.

By the end of September 1979, the Buccaneers were top of the NFL, let alone the NFC Central. Doug Williams’ longest and shortest touchdown passes of his brief career (66 and 2 yards), saw them defeat the Lions, while Lee Roy Selmon inspired a 17-0 comeback in Baltimore to win on Neil O’Donoghue’s overtime field goal. The running of Ricky Bell from McKay’s almost patented I-formation and the stifling Buccaneer defense saw off the Packers, Ram and Bears, and the Bucs were 5-0 at the end of the month. “Tampa Bay – unbeaten, untied, unbelievable!” screamed the front cover of Sports Illustrated to an almost incredulous American nation.

It was ironic in a way then, that the Bucs’ first defeat that season should come at the hands of a coach with future franchise connections, Ray Perkins’ Giants upsetting Tampa 17-14 in the Big Apple. A collective disaster followed the week after at home to the Saints, before the Bucs found themselves back on the winning track. By mid-November, Tampa Bay led the NFC Central with a 9-3 mark and a playoff berth seemed a certainty rather than a possibility.

And then the wheels began to fall off – a pair of missed PATs and a shanked short field goal saw the Bucs lose by a point to the Vikings, while a Steve DeBerg-led San Francisco team scored an 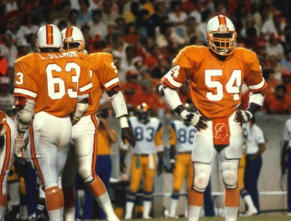 upset victory in the penultimate week’s game. Could the Bucs snatch defeat from the jaws of victory ?

It came down to a rain-sodden afternoon at Tampa Stadium, the Kansas City Chiefs standing between the Bucs and a place in the post-season. The torrential rain made normal offense impossible, but it was a fourth-quarter drive led by Ricky Bell that took the Buccaneers into the playoffs, Neil O’Donoghue’s 19-yard field goal being the only score of the game, the score that gave Tampa Bay a 10-6 mark and the NFC Central Division crown.

A week later, a sell-out crowd at the Big Sombrero saw a pair of Jimmie Giles touchdown receptions see off the Eagles, and the Bucs were a game away from the Super Bowl. Unfortunately, that it where the dream ended, as a lacklustre offense, hampered by the loss of Doug Williams to a shoulder injury in the third quarter, failed to put any points on the board, and it was the Rams who earned the right to face the mighty Steelers thanks to three Jim Corral field goals.

Doug Williams did not post the sort of offensive numbers one would expect from a playoff quarterback, but this was due to the run-first, pass-later mentality of John McKay’s offense, and his willingness to throw the ball away rather than take a sack. It was Williams who was as much the reason for only 12 sacks being conceded in the entire season, as the offensive line. Lee Roy Selmon went to the Pro Bowl, although none of the Bucs’ fearsome linebacking crew earned the honour which was disappointing.

The stifling run defense played by the likes of Batman Wood and Cecil Johnson, was well supported by a secondary that was entering its third year of playing together. John McKay’s plans of getting together young defensive talent and letting them grow into a unit, had worked to perfection, being the main reason for the team’s winning record. “People ask me if I am upset that I never played in the Super Bowl” said Lee Roy Selmon after he retired. “I tell them no, because the 1979 season was the most satisfying season that I ever had. No regrets, no regrets at all.”

Reports: Winston Will Be Suspended for Three Games For the Uber Incident

According to ESPN's Adam Schefter and the Tampa Bay Times' Rick Stroud, Buccaneers quarterback Jameis Winston will be suspended for 3 games for violating the NFL's personal conduct policy and the suspension could be increased it Winston doesn't meet unspecified demands...

Are the Bucs Better at Running Back?

In 2015, the Tampa Bay Buccaneers had a top 5 rushing attack that powered Tampa Bay to a Top 5 offensive ranking for the first time in franchise history. Since then, the running game has struggled. Can the Bucs return...