After 14 consecutive losing seasons, the 1997 Tampa Bay Buccaneers finally ended the Bucs’ long walk into the wilderness, shocking the NFL and even winning the last game at the Old Sombrero.

The spring of 1997 was a big one off the field for the Buccaneers for a number of reasons. Not only was a new stadium going up next to the Big Sombrero for the Bucs to move into 12 months later, but the team had new uniforms too. In a ceremony in April, the old orange and white unis were discarded forever and the new pewter and red colors with a new logo took their place. Hardy Nickerson joined owner Malcolm Glazer in declaring that these were “perfect colors for a perfect team.”

The off-season team news was minor but sensible. Alvin Harper was cut to the surprise of no-one, the Bucs re-signed Paul Gruber and picked up Steve Walsh to backup Trent Dilfer. The draft brought another two first-round picks following Rich McKay’s deal with San Diego the previous spring, and the offense was the name of the game. Warrick Dunn and Reidel Anthony arrived from in-state collegiate powerhouses and tackle Jerry Wunsch, added to the offensive line. 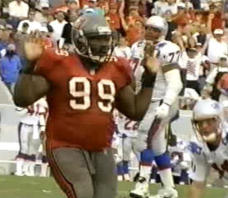 The previous season had ended with some good victories and promise for the future, but no-one expected the Bucs to match the 1979 squad and start the season with five straight wins. But by the end of September, there were the Bucs, heading the NFC Central and the talk of the league. The 49ers had been manhandled at home in the season opener, the Dolphins were flattened on prime time TV three weeks later, and it was 1979 all over again.

Trent Dilfer had his finest season in a Buc uniform in 1997 and would wind up in the Pro Bowl along with seven other Buccaneer players. When you consider that only nine Bucs had gone to Hawaii in the previous 20 seasons, this total was absolutely staggering. Hardy Nickerson and Derrick Brooks led the defense, Warren Sapp began to talk and stalk quarterbacks around the league, and John Lynch became known as one of the hardest hitters in the NFL.

Offensively, the Dunn and Alstott show worked well in 1997. Alstott scored one of the most famous touchdowns in history when his third-effort one-yard run in Minnesota took around half-a-dozen Vikings into the end zone with him, and Dunn had a memorable 58-yard TD pass to ice the Miami victory. That fourth win against the Dolphins, a nationally-televised Sunday night game shown on Channel 4 with myself introducing the show, let the NFL know that the Bucs were back after such a long absence.

And then it became 5-0 as Tampa Bay downed the Cardinals in a game they had no business winning. 18 years after the original headline, the Bucs were back to being unbeaten, untied and unbelievable. The defense was not the dominant force it would become in the next few seasons, but the combination of young talent and the Dilfer-led offense kept the Bucs ahead of the NFC Central for most of the season. A narrow loss to the SuperBowl-champion Packers would prove decisive in the division race, and a mid-season swoon allowed Green Bay to get ahead of the Bucs for a bye week in the post-season. 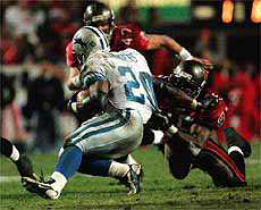 With a month to go in the season, the Bucs had eight wins and were assured of their first non-losing season since 1982. The Packers came to Tampa for a late-season game that was shown again on Channel 4, and an injury to Dilfer gave Green Bay the division title. A month earlier, Sky Sports had shown the Bucs live against the Patriots, and Tampa won their first live game on British TV with a total domination of New England. After an aberration on the road against the Jets, the Bucs clinched their long-awaited playoff berth by hammering the Bears in the season finale.

A week later, in the last game that would ever be played at the old Tampa Stadium, the Bucs stopped Barry Sanders and the Lions and found themselves just two games away from an unlikely trip to the Super Bowl. But in 1997, the Buccaneers’ nemesis was Green Bay. It had been the Packers who had stopped the five-game winning streak in October, and it had been the Packers who had come to Tampa in December and clinched their division title.

And so it was, on the frozen tundra of Green Bay, that the upstart Bucs’ wonderful 1997 season came to an end. Three field goal attempts brought no points (block, unsuccessful fake, and bad snap) and the Packers took over to win 21-7 on their way to the Super Bowl. For the Bucs, it was back to planning for next year, but one that now saw everyone in the NFL anticipating good things from the franchise.

The following statement was just released by the NFL Communications department. "JAMEIS WINSTON of the Tampa Bay Buccaneers was notified today by NFL Special Counsel for Conduct TODD JONES that he has been suspended without pay for the Buccaneers’ first...

Are the Bucs Better on the Offensive Line?

It all starts up front and the Bucs spent some top dollars and draft capital to improve their offensive line. Have they done enough? Losses Tampa Bay lost G/T Kevin Pamphile to Tennessee and Center Joe Hawley to retirement Additions...