Difficulty sleeping? Racing pulse? Feeling warm? Bucs Fever is spreading like wildfire and it’s evident by the many different Buccaneer fan groups popping up all over Facebook as well as all over the country. From the fast growing “Buccaholics”  to the “Buccaneers Invasion”  in Atlanta, there is no shortage of places or pages for Bucs fans to get their football fix and celebrate their Bucs fandom. Every time I pull up my Facebook account I’m being “invited”  to join another fan page or added as an administrator for one somehow. There’s “amateur” podcasts being streamed on YouTube or Facebook Live in staggering numbers. There’s “professional”  podcasts being broadcast all over the place. The Tampa Bay Buccaneers are becoming relevant again and I can only imagine that it will get much, much crazier after HBO’s Hard Knocks debuts this summer. The Bucs are getting HOT. Being a Bucs fan is getting to be popular. The question is, how much room is left on board the ship?

Most Bucs fans have been on board for years. Many, many rough, nauseating, heartbreaking years. I feel like those of us that have lived through 9 losing seasons in the last 14 years have paid our dues and are finally being rewarded for our devotion, loyalty and patience. As much as I love seeing the team gaining popularity, isn’t it frustrating that these new fans are climbing aboard as the team is on the upswing and headed towards winning times once again? Does this piss anyone off? I mean, isn’t there only so much room on board for so many krewe? I guess we should just be happy to see a talented team being assembled and winning football being played in Raymond James Stadium again. We should just be happy that the stadium might actually start selling out home games and being a loud, intimidating place to play once again. We should just be happy to see this kind of excitement swirling around Tampa Bay again. It’s been way too long.

But is it really fair? Should these “closet fans”, or even fans from other teams be able to stroll right on in and join up with those of us who haven’t seen a Buccaneers playoff game since the 2007 season?  Should they be able to waltz into RayJay in their crisp new Howard jersey and their shiny new draft hat and make the same claims as the rest of us who are wearing ratty creamsicle orange Brooks jerseys and sporting 1999 NFC Central Champion hats? Should these first time season ticket holders be given the same privileges as those that have been season ticket holders through 5 seasons of four wins or less since the Super Bowl year? Well, should they?

The resounding answer is WHY NOT?!?! This is Bucs Nation. We are made up of the lifelong devoted as well as the newly discovered. I love seeing this kind of fandemonium going on around the bay area and the rest of the country. Whether you’re a Buccaholic in Hawaii, a member of the Atlanta based Buccaneers Invasion a licensed Stick Carrier in Oklahoma City or just a hardcore Bucs fan from Norway, we’re all in this together and we’re all members of Bucs Nation. There’s plenty of room for anyone and everyone who wants to come aboard and we’ll welcome you with raised flags and fired cannons. We only ask one thing of all our newfound fanmily members…once you’re on board, you stay on board. You never jump ship! We can make you walk the plank if you wrong us in some way, but you can never jump ship. Ever. If you board this ship, it’s for life. No bandwagons. No fair weather fans. It’s all in or you take a swim. It’s about looking forward to next season coming off of 2-14  just as much as 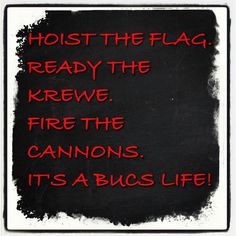 It’s a Bucs life. It’s pewter and red til we’re cold and dead. If you don’t understand what that means then you’d better learn quick or maybe this isn’t the team for you. Maybe you’re more of a Patriots fan. Being a true Bucs fan is not for the faint of heart. It ain’t for everybody. Only a select few of us are lucky enough and strong enough to carry that label. If you feel you’re worthy, then come on in. If not, then move on and have a nice day! No hard feelings. If you try to fake it, we’ll know sooner or later and you’ll be swimming with the fishes. To those brave souls that are willing, Welcome Aboard! Batten down the hatches. Hoist the sails. Raise the red flags. Ready the krewe. Siege the day. Defend the bay. Fire the cannons. One team. One fight. One heartbeat. One family. It’s a Bucs life! GO BUCS!!!

As the Bucs head into the 2017 season, they do so with something in which they were lacking last year: continuity. This team is going into it's second season under head coach Dirk Koetter with his offensive scheme and his...

Now that the Bucs 90-man camp roster is pretty much set (there will always be little tweaks here and there, but for the most part it's set), I decided to take a closer look at this group and see where...