This week, the bay area’s hockey team, the Tampa Bay Lightning, are engaged with the Washington Capitals in the Eastern Conference Final of the 2018 Stanley Cup Playoffs. Interestingly, it isn’t the first time these two communities waged battle for post-season prominence, as the Buccaneers and Washington Redskins faced each other in the 2005 playoffs.

Tampa Bay had stunned the NFL with an 11-5 record. Thanks to the running of rookie Cadillac Williams and the remnants of the defense that had won the Super Bowl just 3 years prior, the Bucs shook off back-to-back losing seasons to win the NFC South.

Tampa Bay opened their playoff run at home against Washington, who snuck into the playoffs as a wild card. The Bucs quickly fell behind 14-0 thanks to an interception return by Washington linebacker Lavar Arrington that set up a 6-yd Clinton Portis touchdown and then a fumble by Williams that was picked up by Washington safety Sean Taylor and returned for a touchdown.

The Bucs would be down 17-3 at the half before mounting a comeback.

The Bucs made it 17-10 by driving 51 yards in seven plays on their first possession of the third quarter, capped by a 2-yard touchdown run by Bucs quarterback Chris Simms. In the fourth, Tampa Bay drove to the Washington 18 yard line but was stymied by the Washington defense when they went for it on fourth down, stopping Mike Alstott on a 1-yard run.

The Bucs wouldn’t give up, as CB Brian Kelly picked off a Mark Brunell pass at the Redskins 35 yard line, setting up one of the most controversial endings in Buccaneer history. 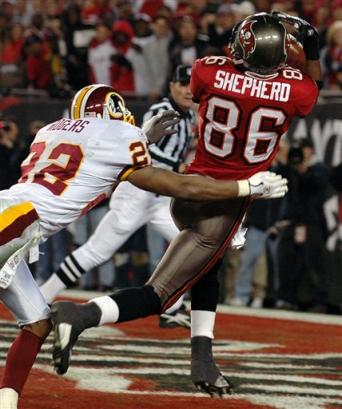 Simms hit Edell Sheppard on a 35 yd bomb from Simms, seemingly tying the game. As Sheppard celebrated with fans, the officials ruled he didn’t complete the catch and it was incomplete.

Bucs coach Jon Gruden would challenge the call but it would not be overturned, robbing Tampa Bay of the tying score and their final timeout. On 4th and 10, Simms would overthrow a wide open Sheppard in the end zone, basically ending the Bucs’ chances at a late rally.

“I thought it was certainly close enough to challenge, given the magnitude of the play and the situation of the game,” said Jon Gruden following the game. “It is what it is. I agree with the final verdict, whether it was for us or against us. I thought it was certainly a great throw and I thought he had both hands on the ball in the end zone. [They said] you have to have possession of the ball. The bottom line is, it was all for naught. I thought we had a chance on the following play, too, but we didn’t convert it. We just didn’t get it done tonight.”

Let’s hope the Lightning have a bit more success in their comeback bid against the Capitals.

Special thanks to Paul Stewart and BucPower.com, the best resource for Buccaneer history on the Interwebs.

Buccaneers: State of the Franchise

The 2017 season. The Super Bowl. NFL free agency. The 2018 NFL Draft. And now rookie camp. They're all in the books, which means that the Tampa Bay Buccaneers 90-man roster has officially been filled. Even though there will no...

Bucs Meet and Greet with Rookies A Fun Time For All

On Monday night, the Buccaneers did something for their fans they've never done before as they held a rookie meet-and-greet for Season Ticket Holders as part of their 2018 Rookie Academy. My lovely wife Rita and I were invited to...