It’s been 11 years since the Bucs last made the post-season. What happened in 2007, the last time the Bucs made the playoffs?

From the moment the 2006 season ended, through free agency and the draft, into training camp and exhibition games, only one subject was at the forefront of stories about the Buccaneers and it involved Jon Gruden being well and truly on the coaching hot seat. Most pundits were expecting nothing more than five or six wins out of the 2007 Bucs and this they all assumed would see the end of Gruden’s reign as head coach of the Buccaneers. How wrong they all were. 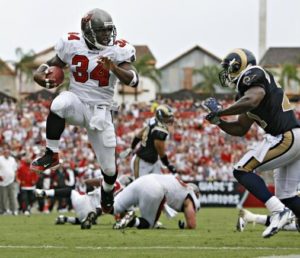 The Bucs did not have a lot of free agents to be concerned about leaving, the only serious loss being DE Dewayne White who was offered a king’s ransom by his former position coach Rod Marinelli in Detroit. But the list of arrivals turned out to be pretty notable, as the Bucs signed four of Pro Football Weekly’s Top 30 free agents in the shape of QB Jeff Garcia, T Luke Petitgout, LB Cato June and TE Jerramy Stevens. All, of course, came with supposed baggage that made them expendable by their former teams. but all four would go on to have successful impacts in Tampa Bay.

The Bucs picked 4th in the draft and thankfully resisting temptations to package their two 2nd round picks to move up to No.2 overall for WR Calvin Johnson, Jon Gruden welcomed the arrival of pass rush specialist Gaines Adams with that top pick, followed by G Arron Sears and S Sabby Piscitelli in the second. Depth for the defense was addressed too with the ultimate selection of CB/S Tanard Jackson in the 4th round ultimately being the one that would be most notable.

And when the season started, so did the injury problems for the Bucs. Cadillac Williams went down to a crippling knee injury in Week 4 in Carolina, followed a few plays later by LT Petitgout. The sight of the whole Buccaneer bench crowding around their fallen comrade became almost a weekly exercise as the likes of Alex Smith, Mark Jones and Maurice Stovall all went down with injuries, although Smith turned out to only miss three games. 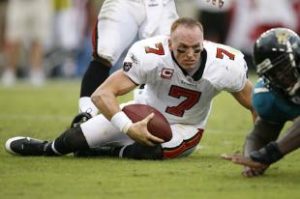 And no matter who went out for the 2007 Bucs, someone stepped up to answer the call. For Cadillac, try Mr. August himself, Earnest Graham. The king of the pre-season and team leader on special teams became the starting tailback and almost gained 1,000 yards. When Jeff Garcia went down, Luke McCown made his first Buc start in a crucial game in New Orleans and promptly completed his first 15 passes on route to a stunning victory. Unknown Donald Penn stepped in at left tackle for Petitgout and played admirably in protecting the passer’s blind side. And so it went on. All the way to a division title.

Yes there were some bad losses in Seattle and Indianapolis, and games the Bucs should have won but didn’t (Detroit and Jacksonville), but taking care of business in the NFC South gave the Bucs the division title with two games to spare. Hence pretty much every starter who mattered was on the bench resting by the time the team lost those two final encounters to San Francisco and Carolina.

But the Wild Card game against the New York Giants was one game too far, even if it was a home tie. Just like 2005, the Bucs went one and out in the post-season. But on reflection, this was a season that turned out a lot better than most Buccaneer fans could have realistically expected.

Are the Bucs Better on Special Teams?

Kicking woes may have cost the 2017 Bucs a couple games in the win column last year. Have they solved their problems on Special Teams or are the Bucs still kicking their own backsides? Losses Kickers Nick Folk, Patrick Murray, long...

Inside the 2018 NFL Supplemental Draft

On Wednesday, July 11th at 1p.m. the NFL will hold their 2018 Supplemental Draft. For those that aren't familiar with this event, it began in 1977 and takes place every year shortly after the regular NFL Draft. College prospects who...