Next up in my “Welcome Aboard”  series is another standout from the Canadian Football League in wide receiver Derel Walker. The 6’1″/190lb speedster is a former teammate of Bucs superstar wide receiver Mike Evans at Texas A&M and will be in training camp fighting for one of the receiver positions on the team.

Walker transferred to A&M from Trinity Valley Community College after his sophomore year. He saw limited action in 11 games of his junior year catching only 8 balls for 85 yards. He had a breakout year during his senior season when he had 51 catches for 818 yards and 5 touchdowns, good enough for second on the team behind Evans. He went undrafted and signed on with the Tennessee Titans. He was released after the 2014 preseason and eventually signed on with the CFL Edmonton Eskimos practice squad in 2015. He was immediately promoted to the active roster and in his very first game caught 10 passes for 125 yards against Montreal. He followed that game with a 14 catch, 183 yard performance against Hamilton. He finished his first CFL season with 89 catches for 1,110 yards and 6 touchdowns while being named the league’s Most Outstanding Rookie. His second season was even more impressive with 109 catches for 1,589 yards and 10 touchdowns.

His first two seasons were strong enough to catch the attention of several NFL teams including the Vikings, Bears, Redskins, Bengals, Jaguars, Niners and Saints. He had three more 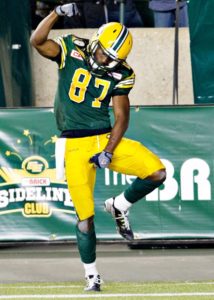 workouts lined up after his Tampa trip, but apparently, the thought of reuniting with fellow Aggie Mike Evans was enough to persuade him to choose the Bucs above all the rest.

He joins one of the deepest wide receiver groups in franchise history with starters Mike Evans and DeSean Jackson, slot receiver Adam Humphries, third round pick Chris Godwin, members of last year’s team Josh Huff, Donteea Dye, Bernard Reedy and Freddie Martino, and undrafted free agents BoBo Wilson and Thomas Sperbeck. There’s going to be some serious competition amongst those bottom seven guys. They’ll be battling it out for what will probably be the final two wide receiver spots behind those top four guys since the Bucs are likely to only keep six receivers. Another one or possibly two of them will end up on the practice squad, but that still leaves three or four of these talented wideouts looking for work with other teams. It’s going to be a fun position battle to keep an eye on throughout camp, but we won’t find out who wins it until the end of preseason. Until the, as always…GO BUCS!!!

The next player up in my "Welcome Aboard"  series is an NFL veteran with 10 years of experience who was brought in to compete for a starting job, and from the looks of it so far in OTA's he could...

Continuing my "Welcome Aboard"  series, this next piece is about recently signed linebacker Jeff Knox from the Canadian Football League. This isn't the first time the Bucs have gone up north to find talent. In fact, they also signed wide...