The dreaded “sophomore slump.” Actually, there is no statistical evidence to back up the claims that NFL quarterbacks regress from their rookie year to their second year. Of course, there are some examples here and there throughout history. In 2011, Cam Newton threw for 4,051 yards and 21 touchdowns as a rookie then slightly underperformed in his second year with 3,869 yards and 19 touchdowns. In 2012, Andrew Luck threw for 4,374 yards then 3,822 yards in year two. Matt Ryan had a good rookie year in 2008 with 3,440 yards but only 2,916 yards as a sophomore. In 2012, we saw Robert Griffin III took the league by storm with 3,200 yards, 20 touchdowns and only 5 interceptions. His second year wasn’t nearly as successful when he threw for 3,203 yards again, but only 16 touchdowns to 12 interceptions.

There are many factors that can effect the transition for an NFL quarterback from rookie to sophomore. Coaching staff changes, player personnel changes, offensive scheme changes, injuries, the player’s work ethic and attitude…it all plays a big part in a player’s success. That’s exactly why Buc’s fans shouldn’t have any concerns about second year quarterback Jameis Winston falling victim to the “sophomore slump“, whether it’s a myth or not.

Winston’s rookie campaign was one of the most prolific in NFL history. He was only the third rookie QB in history to throw for more than 4,000 yards, accumulating 4,042 yards and 22 touchdowns. Jameis also ran for another 213 yards and 6 touchdowns, while earning the Pepsi Rookie of the Year award and his first Pro Bowl appearance.

Despite his accomplishments, Winston enters this 2016 season with a renewed vigor. During the offseason, he admitted to being slightly overweight in 2015 and decided to hire Michael Jordan’s former trainer Tim Grover, who helped him drop nearly 20lbs. “I have very high expectations for this season” says Jameis. “I’m way more comfortable now. I feel like I’ve been there and done that, but I still feel like I have to get better every day!”

Coach Koetter, who believe it or not actually preferred Mariotta over Winston in the draft, is completely on board these days. “Right now, there’s nothing that we ask of him that he can’t do. Jameis is a good communicator at the line, he’s good in the no huddle, he studies like a wild man, and that’s what we love about him.” The new head coach adds “We’re around him every day and we know what he’s capable of. He’s very perceptive about not only what he needs to do to get better, but what our offense and the team needs to be better.” Koetter goes even further by saying “We have a lot of good players on this football team, but from a leadership standpoint, Jameis sets the tone!”

His fellow players echo their coach’s sentiments. Defensive tackle Akeem Spence said “You can tell he’s working to be the best QB in this league. In terms of work ethic, Jameis is one of the hardest working guys on our team. At the same time, he’s bringing others along with him and being the leader this team needs.”

One example of what Spence mentioned occurred in the offseason, when Winston had a private meeting with then “face of the franchise” and Pro Bowl defensive tackle Gerald McCoy. The exact exchange between the two captains remains private, but McCoy confirmed that his QB basically “called him out” on being more of a leader for the team…the veteran agreed with him, no questions asked.

Winston’s work ethic is unquestionable as well, as two of his big target receivers will attest. Mike Evans says “Jameis is the hardest working player that I’ve ever been around”. The duo that connected 74 times in 2015, should be even more lethal this year. “Our chemistry is getting better and we have the same goal, which is to win!” Veteran wideout Louis Murphy also speaks highly of the young man. “Words can’t explain how impressed I am with his ability to focus on his craft. People don’t understand how serious he takes this.” This coming from a player who’s caught balls from other #1 picks such as Cam Newton, Eli Manning and JaMarcus Russell. “There’s just something different about him and his approach to the game. He’s a winner and he wants to deliver!” He also adds that in his opinion, Winston’s football IQ is 100 out of 100.

Bucs G.M. Jason Licht agrees with Murphy regarding Winston’s football IQ, telling the USA Today that “His recall is among the best I’ve ever seen”. Licht was initially impressed with Jameis during pre-draft interviews in February, when Bucs staff put him through some intense whiteboard work. Several weeks later, during a visit with him on the FSU campus, the staff again put him to the test, challenging his recall…and again he was impressive. Then after the draft, during minicamps in May, they questioned him on the same offensive concepts from the pre-draft interviews in February. Not only did Winston recall the plays correctly, he began changing protections and installing concepts that the Bucs hadn’t even put into his playbook yet. Not bad for a 21 year old.

New offensive coordinator Todd Monken says “He’s smart, he’s competitive, and he wants to win as much as anyone. You can win a lot of games with a guy like that!”.

Winston’s main focus coming into the 2016 season is eliminating turnovers. In fact, he says that’s the biggest 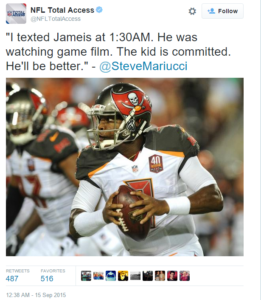 obstacle keeping him from becoming a top passer in this league. Koetter stated that his young QB will be saddled with more pre-snap responsibilities and even more no huddle this year. “We want Jameis to test the boundaries of this offense.” Winston’s approach to prepare himself for the added responsibility is, what else…studying! He spends a majority of his day at One Buc Place and then goes home to watch film of other NFL quarterbacks. He watches not only what they all do well, but what they don’t do well. And it’s not one in particular, it’s all of them. “The more I can learn from everyone else, the better I can make my own game. There are athletic QB’s and there are pocket QB’s, but the QB’s that get remembered are the ones who go out there and win!”

He’s already proven himself in the locker room, which is evident by him being voted in as one of the five team captains again this season. Pro Bowl linebacker Lavonte David says he’s known it since the beginning. “From the first day he got here, he showed why he was the #1 pick!”

The incident that solidified it for me, happened last November in Indianapolis. During a game against the Colts, then rookie wide receiver Evan Spencer got into a verbal sparring match with an Indy fan who was criticizing the Bucs quarterback. Winston overheard the back and forth banter and quickly stepped in, pulling Spencer away from the argument while saying “Lions do not accept the opinions of sheep…he’s a sheep!”. Jameis was quoting a line from the popular HBO series “Game of Thrones”, but it wasn’t what he said…it was what he did and how he did it. This was a 21 year old  “rookie”, taking another rookie by the arm and leading him like I’ve never seen before in sports. Right then, I knew the Tampa Bay Buccaneers franchise was in good hands for years to come.

Am I concerned about a “sophomore slump“? Not at all. And none of you should be either. He has all the pieces in place to continue his success in the NFL. He still has Dirk Koetter and the same offensive scheme. He still has the offensive weapons and now he has a defense too. He has the desire and the work ethic. He has the hunger and the passion. Tampa Bay has waited 40 years for a true franchise quarterback and we FINALLY  have one. Make no mistake about it, this team can and will go as far as the arm, the heart and the will of Jameis Winston takes it…which could very well be right back to the Super Bowl!

On Sunday afternoon the Tampa Bay Buccaneers will go on the road to face their division rival, the Atlanta Falcons. The biggest story line about this game will of course be that it is a homecoming for Bucs HC Dirk...

The Bucs Are Going to The Playoffs This Year

It's been a long drought, hasn't it Bucs fans? Tampa Bay hasn't sniffed post season play since January 6th, 2008 - a 24-14 loss to the eventual Super Bowl Champion in the playoffs and team of destiny New York Giants (that...