As excited as we all are about the DeSean Jackson signing, the Bucs could still stand to add another wide receiver or two in the upcoming draft. Maybe not necessarily in the first round with their 19th pick, but with a pretty deep receiver class they could wait until the 3rd or 4th round to address it. There are a few of the top wideouts that could be worthy of that 19th pick depending on which other players are available but it’s hardly a first round “need”. I’ve been looking at the WR’s in this class and I’ve come up with my own top 10 list of the receivers I’d like to see in a Bucs uniform. So, let’s dive right into it, shall we…

I don’t know if anyone else has realized this but Mike Evans is the only WR on the Bucs roster that’s over 6’1″ now unless Vincent Jackson re-signs with the team. They need to add some size to the receiving corps and this could be the way to do it if Williams is still available with the 19th pick. He’s got prototypical height, weight and speed to be an NFL receiver along with great ball skills and good body control. He can stretch the field vertically or be a real threat in the redzone. He’s just what the Bucs need should they decide to go WR early in this draft. He is long, fast and athletic with quickness and dangerous run after the catch ability. He’s a polished receiver and a good route runner with very good hands. He totaled 5,100 yards and 51 TD’s in his four years of college football. He would probably be my top receiver prospect had he not gone to a smaller school. However, you can’t totally ignore his production, smaller school or not. He has the qualities any team is looking for in a wide receiver and the tools to continue to be successful at the next level. 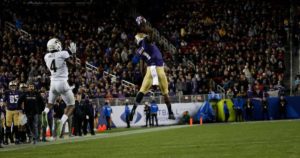 The biggest knock on Ross is the fact that he suffered a torn ACL in 2015, even though he showed no ill effects from it when he broke Chris Johnson’s longstanding 40-yard dash record at the NFL Combine a few weeks ago running a blistering 4.22…WOW! He has a small frame and he’s drawn comparisons to Brandin Cooks, Sterling Shepard and Tavon Austin. He’ll be a dangerous slot receiver who’s able to rip the top off of defenses and will create mismatches in the secondary. He’s fast. He has good hands. He’s a solid route runner. And did I mention he’s fast? He should be an instant impact weapon for one lucky NFL offense. Could it be the Bucs?

Although he played H-back at OSU, he projects more as a receiver in the NFL. Scouts have compared his skillset to that of Percy Harvin with his speed and explosiveness. He’s simply just a playmaker. He’s a good route-runner with good hands and is a serious threat with run after catch. He also adds kick return capabilities into the mix as well. He could be an interesting toy if he goes to a team with a creative offensive coordinator (cough, cough Dirk Koetter). He wouldn’t be a choice at 19 but if the Bucs go TE in the first round and he’s still sitting there when their second round pick comes around, he could make for an interesting choice. He’s got outstanding size and is a reliable target. However, he lacks the speed and explosiveness to be a #1 receiver in the NFL. He looks the part of a possession type receiver and has drawn comps to Anquan Bolden because of his strong hands and physicality at the position. He would be a good pick for a team who already has a speedy receiver on the outside, like DeSean Jackson (hint hint). He could be another good option for the Bucs in the second round if they go another direction in the first. He is one of the few receivers that the Bucs have hosted for pre-draft visits.

He set the NCAA record for career receptions (399) with the help of a Madden like senior season. Some “experts” say his production in college was due to the system he played in. He has excellent hands paired with quick feet. He’s also a good route runner with a high football I.Q. He was literally born to be an NFL player. His father won 3 Super Bowls with the Cowboys and his uncle Jeff Blake played quarterback in the league for 14 years. He was well respected within his program and scouts rave about his character. He’s just the kind of football player the Bucs would like to add in the draft.

“He’s a quick, slippery receiver who can push defenses vertically” according to WalterFootball.com, with above average speed and route running ability. Good size and explosiveness to go with sure hands. He could end up being a steal for the right team in the third round. He’s another one of the few receivers that the Bucs have had in for pre-draft visits so far. He’s the most prolific pass catcher in FCS history setting all-time records in receptions (428), yards (6,464) and touchdowns (73) and he won just about every receiving award possible. He has strong, natural hands and is extremely confident and competitive. He ran slower at the combine than scouts expected which could be why his draft stock has dropped a bit. His four years of insane production were against lower level of competition, but the numbers don’t lie. He has strong football bloodlines with both his father and grandfather playing in the NFL.

He’s long, tall and athletic with superior ball skills. He was an outstanding triple jumper and high jumper in high school and brings that leaping ability to the football field to be a serious redzone threat. He also has the speed and quickness to be a vertical threat. Fun Fact: Mike Evans was his tour guide during his recruiting trip to A&M.

He’s a fast receiver with good hands, but does have a small frame. In 2016, 25% of his catches went for 25+ yards which shows his big play potential. His “NFL comp” is Travis Benjamin which isn’t too shabby. He also has experience with kick return duties which the Bucs are in desperate need of as well. He could be a mid round pickup to add some depth and speed to the receiving corps.

This list of receivers is a mixture of size and speed and the Bucs need some of both. We shouldn’t be surprised if they use more than one pick on this position. I don’t think it will be addressed in the first round, but as you can see there are plenty of good choices in the third and fourth rounds to fill the needs for this team. Luckily for us, they already have a #1 and a #2 receiver in Evans and Jackson as well as a very capable slot receiver in Humphries so they don’t necessarily need to reach for a WR too early in this draft. As much as some of you are whining about needing o-line or safety help, this draft will be all about finding playmakers on offense and pass rushers on defense. Don’t be surprised if they use their first four to five draft picks on offensive skill positions.

My next article will focus on the top 10 running back prospects which I think is a possibility in the first round depending on who’s still available with the 19th pick. Stay tuned for that, but until then as always…..GO BUCS!!!

With a few weeks remaining before the 2017 NFL Draft, it is still early in the offseason. Though the biggest free agent names have already found new homes, there are still valuable players left unsigned. However, at this point in...

The running back situation for the Tampa Bay Buccaneers is in a bit of a limbo right now. Doug Martin is out of rehab and apparently already training out in California, but he still has to serve a 3-game suspension...